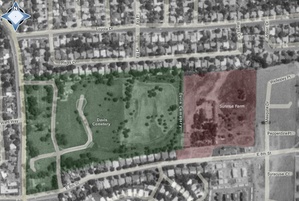 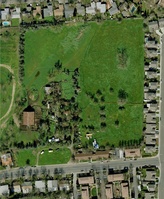 Sunrise Farm was located on several acres with frontage at 2411 East 8th Street . The Chiles Mansion used to sit on the site until it burned down after a tragic murder-suicide in 1972. From that time until 2011 the property was left in its same state as a memorial to those that died in that fire, which were the wishes of the heir-owner, Mary Bado Simmons.

In the 1990's, Rodney Robinson began residing on the property as a caretaker and dutifully maintained the land in an undeveloped state, at the behest of its owner. He dubbed it Sunrise Farm, adding his touches of art and organization to the land. The large barn became an active stable for the horses of Davis residents, and corrals and pastures sprang up. The Davis Fire Crew used the property for over 10 years as an organizing point for their dispatches. Bohemian gatherings would happen on occasion, and sometimes leave behind a reveler or two as longer-term guests.

With the passing of Mrs. Simmons in February 2006 at age 98, the property became subject to the Simmons Estate Concept Plan. After the 2007 sale of the property and the relocation of its caretaker, the property fell into disarray and became a haven for underage partying and homeless individuals. Those who walked the grounds after its sale could see an increasing amount of beer bottles, garbage, and vandalism.

In November 2010 there were two fires within weeks of each other in the property outbuildings. The cause of the fires was thought to be arson or accidents by squatters. The city then demolished all but one of the outbuildings, towed away the bus, and boarded up the barn.

After another fire involving the Big Barn, the barn remains were deconstructed in November 2011. Sunrise Farm is now a large empty lot with a chain link fence blocking entry from East 8th Street. It provides a habitat for wildlife such as rabbits, turkeys, Swainson's Hawks, Kite Hawks, etc..

The property is scheduled for development by local developer Don Fouts who had much of  the remaining vegetation cleared in December 2011.

The land used to be hidden by a frontage treeline, and most people had no idea that the lot extended all the way to the Davis Cemetery, and to the back of houses on Regis Drive. A creek used to run through the property- it is somewhat filled in now, but the depression is apparent. The path of the creek can be clearly seen in the two pictures below:

Below are some snapshots of Sunrise Farm taken in November 2005:

Front of the big barn

Side of the barn with corrals

Yet another small barn

Two-story backhouse, the first building that burned down in Nov 2010

Fountain in the circle

Old bus and other cars

One of the outbuildings, the second building that burned down in Nov 2010

A flag circle where Chiles Mansion once stood

The original sidewalk around the house 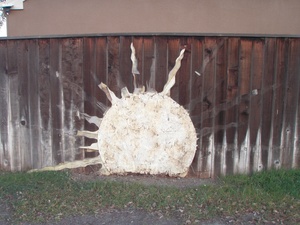 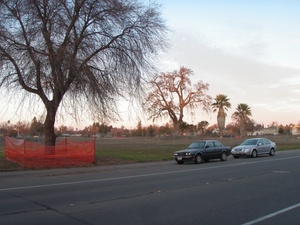 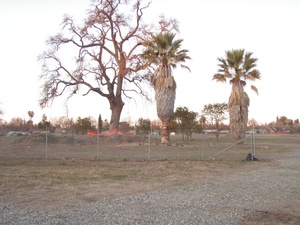 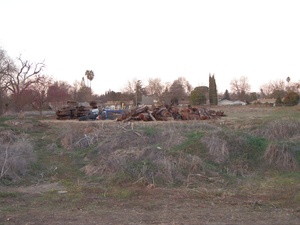 All that remains of the barn

2007-06-25 09:46:53   Cool things you find while browsing the wiki. I ride past this nearly every day on the way to Slide Hill Park and always see the Fire Crew trucks parked there, but never once thought there was more than the small vacant lot. Nice pics! —KevinChin

2007-09-04 16:34:59   I have fond memories of climbing under the fence between Simmons ranch and the Cemetery and exploring the creek and lands beyond....before Mace Ranch was built. As a kid it was our wilderness. I hope they don't plan another boring housing development here. I also enjoyed petting the horses that were stabled there when I would walk the dog or play games in the back area. —JamesSchwab

2011-10-27 23:12:55   For those of us who grew up in Davis, losing this beautiful property and historic barn to generic, tasteless, profit driven suburban sprawl is just plain heart breaking. The developers responsible for this should be utterly and completely ashamed of themselves. Mrs. Simmons wanted this land preserved as homage to her daughter and grandchildren but obviously her wishes have been long forgotten. And who in their right mind would want to purchase a home that borders a cemetery on property where a family was brutally murdered? In keeping with Mrs. Simmons wishes, it could have been made into a wonderful neighborhood park or outdoor education resource for local school children. So sad. —MelissaHayes