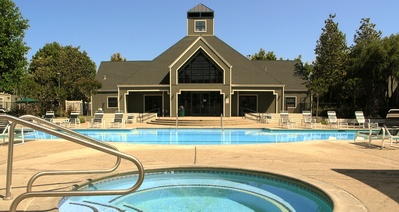 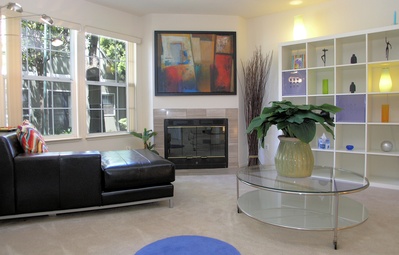 Tanglewood, an apartment complex in South Davis, is the first apartment community you encounter as Richards Boulevard turns into Cowell Boulevard. The complex starts just past the Interstate 80 overpass and extends a little bit past Drew Circle, where the smaller "2020" portion of Tanglewood can be found. This complex is on Unitrans M bus line and W bus line.

Tanglewood is commonly referred to as 'nice' as well as 'pricey'. Monthly rent for its one-, two-, and three-bedroom flats range from $1,315/month to $2,192/month [May 2013]. Advertised features include vaulted ceilings, a washer/dryer in every unit, a 24-hour fitness center, walk-in closets, fitness center, pool/spa and a conference room.

Life in Tanglewood is quiet most of the time; the resident population is composed of students, young families, older folks, and dogs. There aren't many parties in these apartments anymore, but they have two very nice pools and spas. Tanglewood has a nice lounge area with a kitchen (with popcorn, bottled water and coffee)

Tanglewood Apartments was owned by Sequoia Equities. As of July 2015, Tanglewood is now owned by FPI management.

To learn more about rental housing options in Davis, take a look at our Rental Housing Guide as well as our Apartments pages.

2015-08-11 13:51:50   I've been living in Tanglewood for 5 years. There are several issues with this place, good and bad, and I wasn't going to write a review but I would like to warn prospective tenants to beware. Tanglewood is a pricey place for what is offering and they are not delivering on that price. Also, there was a change in management at the end of June. The new management is unfortunately rude and worse than the previous. Beware that there are many bike thefts around here, because their security is not good, common areas not well-lit and bike locks not adequate. Their maintenance is not very good. Their amenities were better maintained with previous management. Additionally, it's common fact the "amenities" here are shared with many other neighbors from the area really. People from the nearby trailer park come and use the pool and the jacuzzi, and the courts because really there is no security. So I stopped using the pool and especially the jacuzzi when I realized I was sharing it with so many people especially factoring in how often these amenities were maintained. A couple times we actually saw people parking their cars across the street, crossing the road, coming to the pool, taking a dive, and then leaving the pool as if everything was great. Just a thought. Another problem we had was the Internet speed. We changed providers three times and it was impossible to get the promised speeds because of the location of the apartments. I was eventually told by Comcast and ATT that unless there is a house renovation or change of cables inside the house, there is nothing they can do, because this is a packed area, being serviced by a single Internet hub (Comcast). It is better for the newer Tanglewood houses that are closer to Safeway. So there you have it. On the plus, it's nice to have your laundry in-house. But I wouldn't recommend the place anymore. The new management should be nicer to tenants also- that's not how to treat your tenants. The way I have been treated over the last couple of months has been very interesting. There were issues before but at least people at the desk tried to help because that's their job. At least they motivated me to write a review that will inform people. Many other better options in Davis :-) —mariapap

2015-10-08 19:40:13   TANGLEWOOD IS UNDER NEW MANAGEMENT!! Absolutely LOVE the new people. They are very thorough, detail oriented and friendly. They are definitely taking better care of this place than when Sequoia was here (printer in computer lab broke Spring 2014, it had an "out of order" sign until Summer 2015 when they sold Tangelwood over to FPI Management). They are currently renovating and remodeling the entire clubhouse, and in between leases they remodeled all the empty apartments for the new tenants for when they move in. VERY IMPRESSED with the new people and have not had any problems with them. NEW MANAGEMENT IS GREAT :) —AndieTonnu