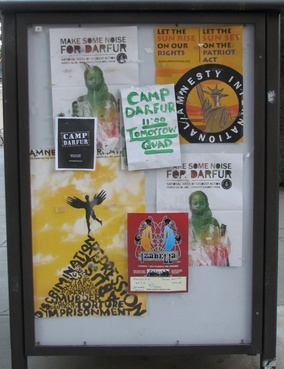 Students Take Action Now: Darfur (STAND) is a national anti-genocide coalition comprised of high school and college students who are taking action to end genocide, specifically in Darfur, Sudan. The UCD Chapter focuses on raising awareness among the UCD community. Meetings for the Winter 2011 quarter are on Wednesdays from 7:30-8:30 pm in Wellman Hall 105. They can be found tabling outside the MU during the week and at Farmer's Market on Wednesdays and Thursdays.

Current and Upcoming Events and Campaigns

* A joint weekly letterwriting campaign with UCLA Darfur Action Committee to lobby for Darfur-related legislation (Please email above to join the listserve to receive a letter by email each week).

John Prendergast is Senior Advisor to the International Crisis Group and one of the leaders of the ENOUGH campaign. A leading American human rights activist, Prendergast is focused on bringing international attention to the genocide in Sudan and the atrocities of the Lord's Resistance Army in Northern Uganda.

Previously Prendergast worked at the White House and State Department during the Clinton administration, where he was involved in a number of peace processes throughout Africa. He has also worked for members of Congress, the United Nations, human rights organizations, and think tanks. He has authored eight books on Africa, the latest of which he co-authored with actor/activist Don Cheadle, entitled "Not on Our Watch."

Come to hear him speak about Darfur, activism, and his new book Not on Our Watch: The Mission to End Genocide in Darfur and Beyond. A q&a and book signing will follow the talk. Books will be available for purchase.

THIS EVENT IS FREE AND OPEN TO ALL

Past Events and Campaigns

* UC campaign to divest from Sudan