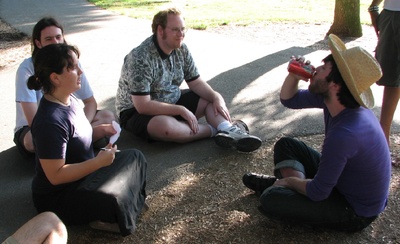 Fellow wikizens, greetings and salutations. A Davis Wiki barbecue on the date of Tammuz 21 (July 7), being a Saturday, in the Year of the World (Anno Mundi) 5767 (Anno Domini 2007, Anno Lucis 6007, 10X) has been declared for the premises of Slide Hill Park. Whether you're a wiki user or otherwise, anyone and everyone is welcome to attend!

To get here you can take the P/Q Unitrans busline. Schedules for Saturday: P line and Q line.

We'll get started at 3PM, but will probably kick it in the park until it's dark based on past experiences.

Libations, comestibles, and combustibles will not be provided if they are not brought. So bring food (remember the vegetarians/vegans), drinks, games (catapults, cardboard, etc.), music, yourself, or whatever. But harken to the gathering!

please add yourself. you don't have to or anything, but it'd be nice! 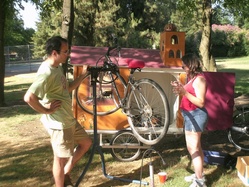 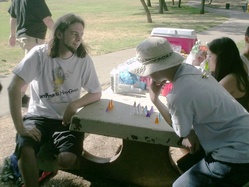 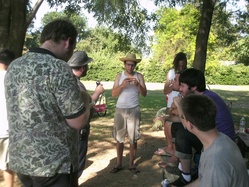 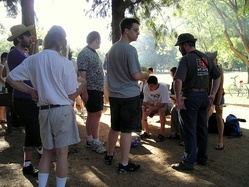 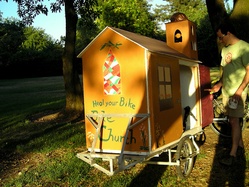 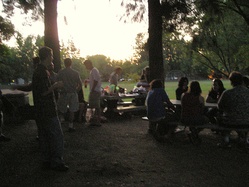 sunset, right before the attack sprinklers went off 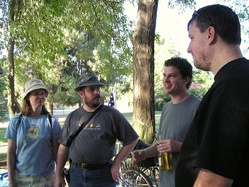 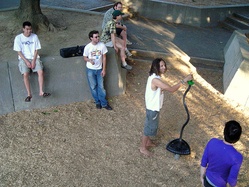 let's gather at the slide, see who we can pressure into hurting themselves 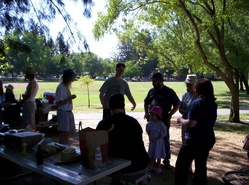 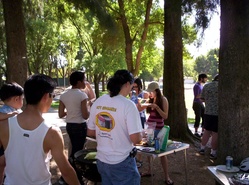 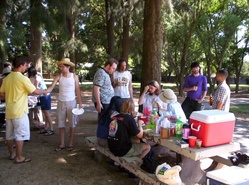 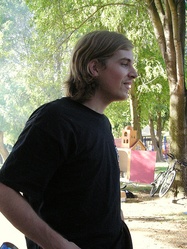 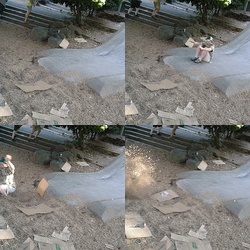 Ed goes boom! or splash! or crash... whichever you prefer 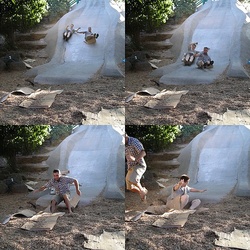 Daubert and Charles, check out that air! 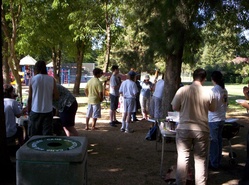 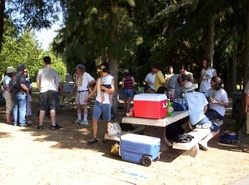 Food and games action going on.

2007-06-26 18:40:14   questions: is this open to anyone on the daviswiki? are there any games or activities planned? For example, could we arrange the catapult? ok, zaijian. —JessicaRockwell

Absolutely anyone who wants to can come. Arrange any activities you would like!

2007-06-27 05:02:12   possible drinking game: everytime someone says "wiki" or "davis", take a drink. (if you do this to the word "evidence" while watching richard dawkins' the root of all evil?, you get plastered very quickly). —JessicaRockwell

Does anyone else think 3 is too early? it'll be really hot. also, food is going to be needed. so if ppl come from 3 on, the dispersal of the food seems like it may be lopsided with lots of variety for ppl at the end, and the early ppl not getting much options. never been, so i don't know. just throwing this out there. additionally, some ppl wanted to have a showing of teknolust. i doubt there are outlets for a projector. can you even show rated R movies in a park? —JessicaRockwell

Does someone have a projector?

2007-07-07 11:46:13   Okay, I'm definitely bringing an assortment of hotdogs and buns, and perhaps some other goodies. I also have a lot of hamburger buns, but no hamburger. So if anyone wants to brings some, post here.

2007-07-08 19:57:00   Yeah, I will totally add some photos like now, once I edit them and all. Seriously, this comment will help me push myself to do it. I also have great videos of the death slide and the spinning toy of doom! —MichelleAccurso

2007-07-08 22:16:57   Thanks everyone from Lil and I; we had an awesome time (if not a bit distracted by the birthday party across the way). The pic of Ed on the doomslide (our name for it) is classic. I hope he was able to safely extract the woodchips from his person. Little z and I discovered a distinct difference in speed between this one and the one at Community Park our first time here. . . enough that I'd never again try it on cardboard. Brave folks :) . —KevinChin

2007-07-11 01:10:51   Next time, I'll go back to my old ways of BBQing massive amounts of fish and chicken, but this time I was sattled with way too many hotdogs left over from July 4, thus the zillion hotdogs. When's a good time for the next one? Late Sept for back-to-school-a-que? OMGLOLROFLBBQ-F07? —JaimeRaba

We need to have another one! —MichelleAccurso