A great place for shopping with local businesses, food and entertainment. 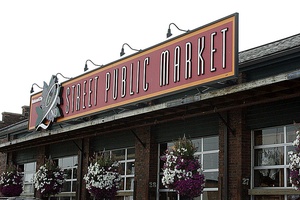 When Five Rivers MetroParks took over the maintenance and operations of the Wegerzyn Horticultural Center in 1995, they also inherited a thriving farmers market held weekly in the park, as well as several satellite locations such as Courthouse Square and the Dayton Mall. The farmers market had been established as a fundraiser for the Wegerzyn Foundation.

In 1998, Marvin Olinsky, the district’s director, envisioned expanding this market and moving it to downtown Dayton to Van Cleve Park (what is now RiverScape MetroPark) which was also newly administered by the agency as part of a bold new riverfront development plan. However, Olinksy also wanted to see that the market could be held year-round, which would require a covered structure. Building a market structure at Van Cleve turned out to be unfeasible at the time, so the district began to explore other locations downtown for the expanded year-round market.

Along came three developers working on a housing project in the Webster Station district of downtown called the Cannery. The Webster Station Development Group had a 45,000 sq ft warehouse garage as part of their complex that they were willing to utilize as a temporary home while their apartments were under construction. The Winter Market debuted in November 1998 and featured 18 vendors from Wegerzyn’s Farmer’s Market with foods like baked goods, organic vegetables and chicken & ostrich meat, kitchen and cooking-related items, soaps sold by the slice and gladioli, a favorite among the regular Wegerzyn crowd.