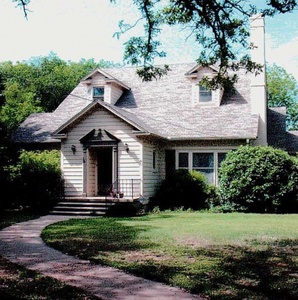 There are two stories of origin for this house. One it turns out is a myth, although believable when looking at old photos of the house. The other is true, but with a few added details.

Version One: The house was built in the late 19th century and then extensively remodeled in 1950 by Francis M. Craddock Jr. and wife Gladys.

Version Two: The house was built in the late 19th century. In 1950 the house was torn down by Francis M. Craddock Jr. and wife Gladys, who salvaged the materials from the original house to build the house that is now on the site.

I have come to believe version one after speaking with Martha Len Nelson and viewing tax records from the mid 1940's to the mid 50's. Martha whose childhood friend, Dorothy Craddock, was raised in the house has a clear memory of Dorothy's mother, Gladys, wanting to modernize the house, in particular removing all of the porches and adding a foyer. She also recalls the remodeling that ensued while the Craddocks continued to reside in the house throughout the construction. Martha described to me the portion of the house as it is today. The "before" and "after" exterior photographs clearly demonstrate that there was a dramatic alteration to the house in 1950, a transformation so substantial that one could readily believe that the original house was torn down and replaced by the current structure. But, when you compare the foot prints of the house from the 1940's to the existing footprint it is clear that they are the same foot print. The earlier tax record also shows that the garage, a house (no longer on the property) and a barn (no longer on the property) were added in 1924. I have heard oral accounts that there was an out building with an apartment above it at some point. Perhaps this was it.

The Duggan Abstract for the property shows Mr. and Mrs. J.M. & M.C. Copely (a local lawyer in the late 19th century) taking a mechanical lien out, dated in 1895, for "lumber and materials" to be used for improvements on the lot. In 1898 Francis M. Craddock purchased the property, where ownership remained constant in two generations of Craddocks, until 1955. The earlier tax record dates the house to 1900. I suspect that Copley may have started the house and sold it to Craddock before it was completed.

The first Mr. Craddock who owned the house also owned Craddock's Saloon on the south side of the downtown square, documented in a photograph taken in 1877 and advertised in the 1890 Denton Business Review and Directory and again in the "D.M. Anderson Directory Co.'s Business Directory and Handy Guide of Denton". He was also one of about two dozen merchants and individuals who contributed money to a loan made to the city of Denton in 1908 for an improved sewage system (interesting that there was a notable outbreak of typhoid in July and August of 1908 in Denton).

His son, Francis M. Craddock Jr. opened Craddock's Grocery and Market just south of the Square on Elm Street (where Dusty's bar is currently located) sometime on or before 1910. This younger Mr. Francis M. Craddock purchased his mother and father's house from his sister Lillian Wilson in 1923. She owned it from 1918, after both senior Craddocks died, until the time she sold it to her brother. It was this Mr. Craddock and his wife Gladys who Extensively remodeled the house in 1950. They resided in the house until both of their deaths by the mid 1950's. Mr. Craddock owned and operated Craddocks Grocery and Market his entire adult life and his son, Francis Keith Craddock, Joined him in the business after a stint in the military. Francis M. Craddock Jr. was also active in the Denton Civic life and served at least two terms as a City Commissioner in the late 1920's and early 1930's. His name is among those on the plaque at the old city hall.