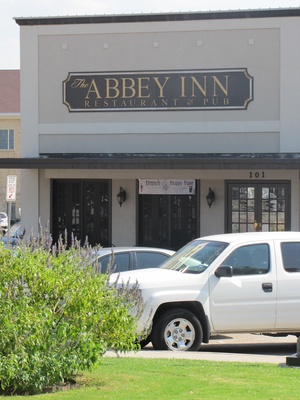 Abbey Inn is a restaurant on the square which attempts to emulate the "ambiance of an English Pub". In fact, it fails to resemble an English pub in every respect, though it's not bad eating.

Behind Abbey Inn is a bar called Abbey Underground. It's such a coincidence.

Like all British buildings, there are fake stained glass windows inside, which don't actually lead to outside. There are also lampposts indoors, like any respectable British establishment.

Unfortunately, the restaurant falls short on the complete lack of curry. All British people really eat is curry, constantly.

Back in the day, there was a place on Fry Street called Texas Jive. When that shut down during the demolition of Fry Street, the bar split into three establishments; TJ's Pizza, Boiler Room (now Abbey Underground), and Abbey Inn.

It used to be owned by Tim Trawick, but is now owned by his brother, Chuck Trawick.

The building ain't that old.  There was another building there before it, which, in 1901, was inhabited by a company called "Minnis and Curtis Drugs". 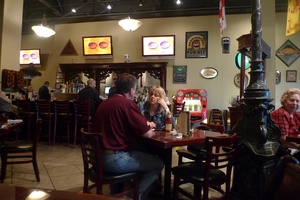