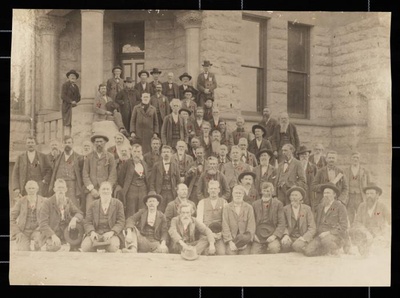 Sixty men sitting on the steps the Denton County Courthouse circa. 1890. B. F. Paschall sits fourth from the left, in the front row.  Talk about Denton beards!

Benjamin Franklin Paschall was a respectable grocery merchant6 and confederate veteran2, notable for being the original owner of the building which now houses Andy's Bar and Paschall Bar, for which he is the namesake.

Born in Weakley County, Tennessee, he lived in Kaufman County, Texas, then came to Denton from  in the early 1870s.

In his time here, he was considered to be a very respected citizen of the City of Denton.  He "indulged in the following enterprises: liquor dealer, builder, contractor, stock dealer and lastly grocery merchant".6  The Andy's/Paschall building is where his grocery store was located, then called "the Paschall building".6

He died, December 1921, after several months of being ill, and was survived by his widow and four children - B. F. Paschall, Jr. of Frederick, OK; Carroll Paschall of Amarillo; Mrs. C. Lipscomb of Denton and Miss Minnie Paschall of Denton.1   He is buried in IOOF Cemetery.5