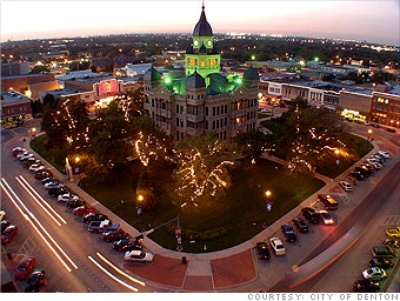 The Square is an important gathering place for Dentonites.

Were you looking for Denton County? Or maybe you were looking for one of the other Dentons.

The City of Denton (referred to as Denton, Little D and at least once referenced as the Athens of the South) is the county seat of Denton County. Residents of Denton are called Dentonites (occasionally Dentonians, though this is generally considered pretty weird). Its population was 121,123 according to the 2012 U.S. Census Bureau estimate, making it the eleventh largest city in the Dallas/Fort Worth (DFW) Metroplex. Geographically, it is 40 miles south of the Oklahoma–Texas border, 40 miles northwest of Dallas, 40 miles northeast of Fort Worth, and 37 miles west of Plano.

A Texas land grant led to the formation of Denton County in 1846, and the city in 1857. Both were named after pioneer and Texas militia captain John B. Denton. The establishment of the two universities helped distinguish the city from neighboring regions. As a result, educational services, as well as retail trade, play the largest roles in the Denton's economy. The town is known for its active music life, which Paste magazine named America's "Best Music Scene" in 2008. The annual North Texas State Fair and Rodeo and the Denton Arts and Jazz Festival are major events that attract over 300,000 people. Denton has seen considerable growth in recent years and in 2006, Money magazine named Denton No. 58 out of the "Top 100 Best Places to Live in America." 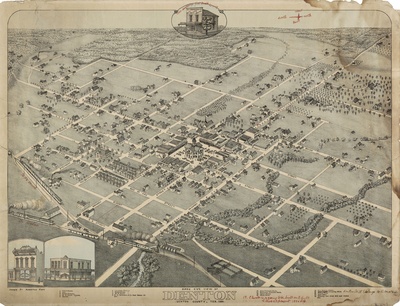 For more information see the History of Denton main page.

The formation of Denton is closely tied with that of Denton County. Unlike other neighboring cities in North Texas, there is no record of a large native-American population in the area before 1800. European settlement began in mid-1800s when William S. Peters of Kentucky obtained a land grant from the Texas Congress and named it Peters Colony. After initial settlement in the southeast area in 1843, the Texas legislature voted to form Denton County in 1846. Residents chose two different county seats (Pinckneyville and Alton) before voting on Denton as the final county seat in 1857. Both the county and the town were named in honor of John B. Denton, a preacher and lawyer, who was killed in a 1841 battle led by General Edward H. Tarrant against Keechi Indians. A commission composed of Otis G. Welch and others laid out the city and named the first streets in 1857. Denton was not incorporated until 1866; its first mayor was J.B. Sawyer.

A local resident's tattoo, in which his nipple acts as a marker for Denton.

At one time considered the cultural center of Denton, the area surrounding Fry Street was home to a group of shops, music venues, and restaurants. Many of the buildings were originally constructed in the 1920s. From 1914 to 1959, Denton was governed under a mayor-city commission form of government, but a new charter adopted in the latter year switched the city to a council-manager form of government.

In 1954 the regional office of the Federal Civil Defense Administration moved from Dallas to Denton, and a few years later a large underground shelter was completed. For a time it was the only FCDA underground shelter and was designated as the place from which the president of the United States and other federal officials would direct the country in case of attack. The FCDA shelter would later become the headquarters of FEMA Region VI.

In May 2006, the 100-block of the historic Fry Street area was purchased by United Equities, a Houston-based real estate company, which announced that several of the historic buildings would be demolished to accommodate a new mixed-use center. Known as Fry Street Village, the center would include retail stores and restaurants. The proposal polarized the city, and a grass roots effort by the non-profit organization Save Fry Street began soon thereafter. It sought to preserve Fry Street as a historic and cultural icon for the city. Development stalled in 2008, when the city council rejected a permit that would allow for the construction of a drive-thru CVS Pharmacy, the anchor for the project.

Quakertown was originally a settlement of African-Americans in Denton, named after the Quakers who had helped in the Underground Railroad. Quakertown was the center of a number of African-American communities, and contained churches, a school, businesses, a doctor and a funeral home. When Texas Woman's University was built in close proximity, there was an election over whether or not to build a park in the location of Quakertown. The election was won in favor of the park, and the African-American residents were forced to leave. 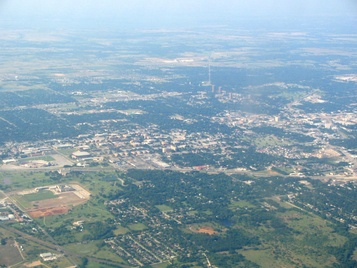 UNT is in the center, TWU towers visible in background.Geographically, Denton is located on the northern edge of the Dallas-Fort Worth metropolitan area at the intersection of I-35 and U.S. Highways 380, 377 and 77. It is also here that I-35 splits into I-35E and I-35W to reach Dallas and Fort Worth, respectively. These three cities form the area known as the "Golden Triangle of North Texas." Lake Lewisville, a fishing destination named the "Urban Bass Fishing Capital of Texas", is located 15 miles south of the city.

According to the United States Census Bureau, the city has a total area of 62.3 square miles, of which, 61.5 square miles of it is land and 0.8 square miles of it (1.33%) is water. The land lies in the northeast edge of the Bend Arch-Fort Worth Basin, which is characterized by flat terrain. Elevation ranges from 500 to 900 feet. Underneath the city is a portion of the Barnett Shale, a geological formation believed to contain large quantities of natural gas.

With its hot, humid summers and cool winters, the climate of Denton is characterized as humid subtropical. Dry winds reach the area in the summer and can bring temperatures to 100 °F, although the average summer temperature is in the mid-90s. The coolest month is January with temperatures dropping down to an average minimum of 32 °F. Average snowfall in Denton is similar to the Dallas-Fort Worth average of 2.4 inches per year, though a notable extreme happened on Snowmageddon. Denton lies on the bottom end of the Tornado Alley area. Although tornadoes rarely form, tornado watches are issued by the National Weather Service. Flash floods and severe thunderstorms are frequent occurrences during the months of spring.

The city's all-time high temperature is 113 °F, recorded in 1954, while the all-time recorded low is −3 °F. Denton receives approximately 37.7 inches of rain per year. 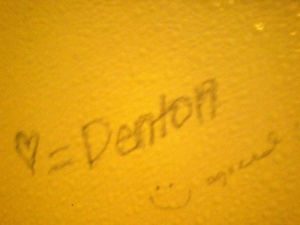 There are plenty of things to do in Denton, not all of which require alcohol consumption.

Alcohol is very popular in Denton though.

Other people get exercise, even going so far as to ride bicycles.

Some people edit DentonWiki for fun.

Others just go to see moving pictures, or see live stage plays at The Campus Theatre, or read books at the libraries.

The Denton music scene has been noted nationally. Denton is the origin of acts such as Sarah Jaffe, Brave Combo, and Bowling for Soup.

For over a hundred years Denton has been the home to two prominent Texas Universities, the University of North Texas and Texas Woman's University. For this reason, Denton is often characterized as a college town.

There are quite a few buildings.

Dentonites like to organize, from the Mormons to the bisexuals.