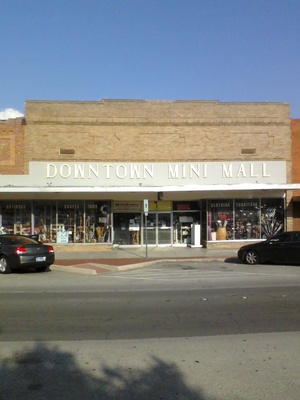 The original Mini Mall. We think it's the original, anyways. 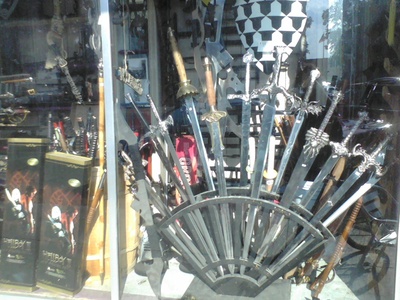 Typical window display, probably set up by one of the old ladies.

The Downtown Mini Malls is a business run by a collection of people, located on the square. They don't have a website.

Update: in 2017, one of the buildings (the one closest to Jupiter House) was torn down after a fire. Jupiter House was renovated, after this change.

They have great prices and cash purchases will get you a discount with some dealers. If the price is to high and you want to make a deal it never hurts to just ask they are there to sell their goods.  Good for a look!

This building was once occupied by an F.W. Woolworth Co.

Not sure how old the building is, but it definitely wasn't around in the 1940s when the space was occupied by Denton Dry Goods Co. 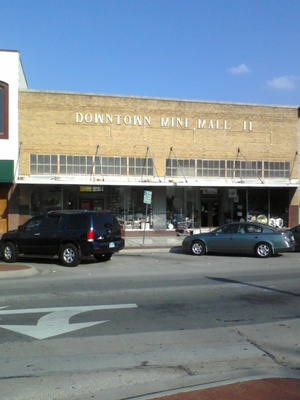 They have two locations for anyone who finds it difficult to find the original. It's two buildings down from the other.

My Mom worked for Leo Will at the Mini Malls for most of my young life. When he opened the Mini Mall II, it was originally a fabric store (which explains the old lady smell) The back of the store has a mezanine that my brother, and I would play in while my mom was up front with customers. Next to the entrance of the mezanine, there was an old broken dumb waiter. (like one of those things that Haley Joel Osmond got stuck in in the 6th Sense) My brother and I would go upstairs and throw things down the dumbwaiter for entertainment. (Hey! we were kids) One day, My brother decides to throw my pair of shoes down the dumbwaiter as a joke. Unbeknownst to our childish minds, the back wall had been refurbished and built over to create more room for booths. My Mother was livid! As I recall, big brother had to use his allowance to buy me new shoes. PLUS, I can always know that there is a small part of my life in the walls of a place that was such a big part of my past! :D