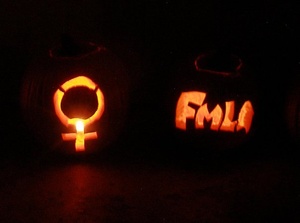 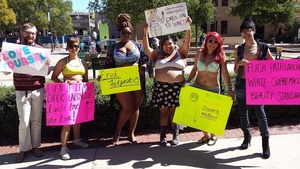 FMLA is a group dedicated to ending violence, promoting women's choice, and lots of other lovely progressive things.

FMLA helps support the TEA Fund. Many of their volunteers are FMLA members and officers. 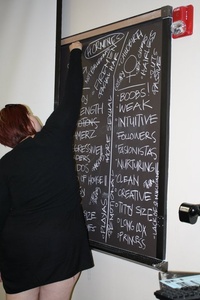 FMLA started as a small group in August of 2000, by Jessica Terlikowski, Isabel Ferry, Rachel Burlage, and Kathleen Thompson, originally called the Women's Collective. Meetings were held in the Women's Center on campus. Kathleen Thompson was the original President. Around 2002, the group became affiliated with the Feminist Majority Foundation, and was renamed the Feminist Majority Leadership Alliance.

As early as 2002, FMLA started presenting the Vagina Monologues, a show devoted to raising money for charities.

It later moved to Bruce Hall's choir room thing, but it was kicked out when Bruce Hall decided it didn't like student organizations anymore.

Around 2003, FMLA protested CVS for refusing emergency contraception to a sexual assault victim. That year, FMLA was on the evening news in the DFW area, because a student had been convicted of sexual assualt in Oklahoma, and also had rape charge pending against him at TWU, but the judge in Oklahoma allowed him to finish his last year at UNT before serving his 6 month sentence. Media started calling Samantha Sewell, the 02-03 president — FMLA made lots of press statements about how the university, who knew of this kid's criminal charges, allowed him to stay on campus and endanger other students. Sewell set a meeting with the Dean and then before our meeting, he expelled the student.

In the fall of 2003, FMLA held Poll-A-Palooza, a big festival to register people to vote, which had music and tabling with all campus groups, even the Conservatives. FMLA was one of the top FMLA's in the country that registered people to vote. They registered so many folks that they got to send a member on the FMF/Ms. Magazine cruise.

In 2004, because of all of the money raised through the Vagina Monologues, which they continuously gave to the Parkland Rape Crisis Center, they helped to open the Child Play Therapy Room at Parkland, for children of abuse victims. FMLA's name is on the plaque, on the door, and they cut the ribbon at the opening.

In 2005, a handful of FMLA officers were involved in the founding of the TEA Fund. FMLA is still very much involved with the non-profit, and usually hosts annual meetings about TEA Fund.

In 2010, FMLA protested against "Justice for All", a pro-life organization who put up obscene signs at UNT.

Justice For All came back on November 7th and 8th, 2011, and once again FMLA stood in counter protest along both days.

When it's not too cold outside, they get in their underwear, or whatever else is comfortable and hand out compliment cards to people!  The point of this event is to make everyone feel good about themselves and overcome cultural standards of body image.

UNT's FMLA hosts a production of the Vagina Monologues, annually, raising over $120,000 for charities in the past ten years. The proceeds go to local rape crisis and battered women shelters, as well as a spotlight. In recent years, the spotlight has been the rape victims of the Democratic Republic of Congo, and the women and girls affected by the Haiti disaster.

The early UNT productions were often met with protest by conservative groups, though, in recent years, protesters have failed to appear.