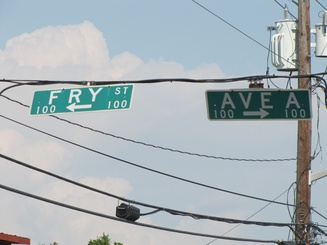 Fry Street is sometimes referred to as the 6th Street of Denton after 6th Street in Austin.

The name "Fry Street" usually refers more to the area surrounding Fry Street between Oak and W Mulberry, stretching down some of Hickory, including all of the bars in immediate proximity to that strip. Most of the time when people say "Fry Street", they're not actually talking about Fry Street at all. When the area was briefly purchased by "the man", the area was going to be renamed "Fry Street Village" (it even had a corporate logo).

Like the square, Fry Street is a favorite place for students and other locals to get incredibly drunk every single night of the week, or sometimes even study.

1869 — The Fry family name appears in the history books with Lewis Fry, who ran a livery stable and became sheriff that year. D.H. Fry also operates the Denton Hotel on northwest side of the downtown Square.

1880s — Dave Fry runs a meat market on the Square. Also during this period, the Fry Street area was the old fairgrounds.

Late 1890s — A small service area with boardinghouses develops across from the old Normal School, now UNT, which was established in 1891.

1925 — Strip at Hickory and Fry streets first noted with the opening of M Systems, a grocery store.

1936 — Two shoe shops and a cleaner are open on Fry Street. A pharmacy, beauty shop and TC Eat Shop 131 are located on Avenue A.

At one time considered the cultural center of Denton, the area surrounding Fry Street was home to a group of shops, music venues, and restaurants. Many of the buildings were originally constructed in the 1920s. 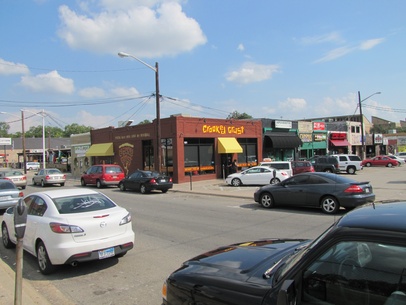 Though these streets are not "Fry St", they are generally referred to as "Fry St". n May 2006, the 100-block of the historic Fry Street area was purchased by United Equities, a Houston-based real estate company, which announced that several of the historic buildings would be demolished to accommodate a new mixed-use center. 2007 would see the eviction of most of the businesses in this area. Known as "Fry Street Village", the center would have included retail stores and restaurants. The proposal polarized the city, and a grass roots effort by the non-profit organization Save Fry Street began soon thereafter. It sought to preserve Fry Street as a historic and cultural icon for the city.

In an act of rebellion, the gutted buildings on Fry Street were set on fire June 27, 2006. Fire Marshal Rick Jones obtained a felony arrest warrant for arson for James Taylor Moseley on July 3. Moseley apparently left the state after the June 27 fire. (A video of the fire.) Moseley was ultimately cleared of charges, and claims to have not committed the arson.

The Tomato is a legendary pizza establishment in the history of Fry Street, which was burned by the unknown arsonist(s) after it had been closed down for demolition and gutted, but just days before United Equities was scheduled to actually demolish it. It was a major hang out spot and loved by many. The walls and tables were all thoroughly graffitied over decades.

Development stalled in 2008, when the city council rejected a permit that would allow for the construction of a drive-thru CVS Pharmacy, the anchor for the project. Demolitions and the fire, however, had already taken place. 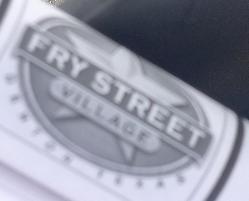 Another developing company, Houston-based Dinerstein, is redeveloping Fry Street. Their plans have been better received by the community than United Equities' were. Dinerstein plans on developing a LEED certified (silver level) mixed-use building. The development will have apartments, restaurants, a parking garage and other retail spaces, with emphasis on local/regional businesses as opposed to chains.

The Tomato has reopened, however it is no longer located in Denton.

It has been confirmed that Cool Beans ain't goin no-where.  It's currently the only building on the block which was not leveled.

Fry Street has a busy night life.  The bars come to life, and the drunks sing 'til their hearts' content.  Usually E.B. can be seen parked in a van on the corner of Fry and Hickory, selling his home made herbs and spices.  Bubbles spew forth from the van, floating down the street.  It's real perdy.

Bubbles from the Bubble Van in front of Cool Beans