We got scary shit here. 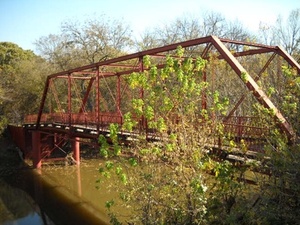 Old Alton Bridge holds a story of great pain and sorrow involving an old man and some racists who kill him. The DENTON HAUNTS website contains details and links about infamous Denton County ghosts and spectres.

Bruce Hall has a ghost named Wanda.  It is said that the abandoned elevator is haunted by Wanda. Legend has it she committed suicide & lives in the attic or 4th floor D hall.

Art Six Coffee House has a framed article about a family that was murdered in the same house decades ago.  Though it is most likely a hoax.

The events of the film The Rocky Horror Picture Show are set in Denton.  The film co-stars UNT graduate Meat Loaf.

The basement of Rocky's Sports Bar has been haunted ever since someone used an ouija there. That's why the stairway is bricked over.