Golden Triangle Mall is an enclosed, single-level, distressed shopping mall located at the intersection of Loop 288 and I-35E in Denton, Texas. It contains 7 major anchors, a playplace, and total leasable floor area of 764,719 total sq. ft. 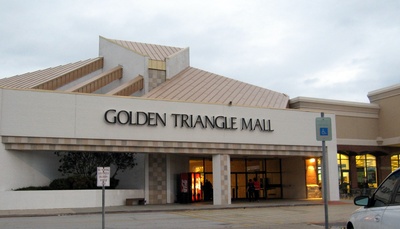 Photo by Mahanga Golden Triangle Mall opened in 1980 as the first enclosed shopping mall in Denton County. The mall thrived in the 1980s, but began suffering when the much larger Vista Ridge Mall opened just in Lewisville, just south on I-35E, in 1989. Denton Mall Co. sold Golden Triangle to Simon Property Group in 1999. In 2000, Golden Triangle underwent a $3.5 million renovation of its interior, including new floor tile, updated entrances, restroom facilities, and mall graphics.

The name comes from the "Golden Triangle" formed by Denton, Dallas, and Fort Worth. Denton is at the apex because North is the top.

It has been given the nickname "Ghetto Triangle" by those who work there.