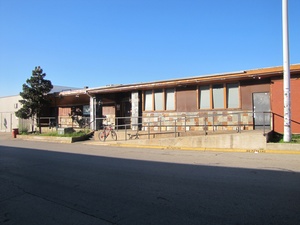 Hailey's looks like that place you deal your drugs at night. (11/11)

Hailey's is a club/bar in Denton, near the square, across the street from Hannah's.

Hailey's is well known for its weekly 80s night every Thursday for the past 7 years (since 2004), which started with Jonathan Graham (DJ G). On Tuesdays, Hailey's holds 90s night. Both events are now exclusively 18+

Typically prices are fairly high at Hailey's, so people eager to dance to 80s and 90s music tend to get trashed at other bars on the square first, then head over to Hailey's for the final hour or so of the night. To fight this trend, they started presenting patrons with 1 dollar single and 2 dollar double wells on Tuesday. Watch for your tab, as bar tenders have been seen to get mixed up. This is understandable as they have an enormous crowd around their bar space. 3 tenders provide drinks to about 70 people.

Veteran Hailey's dancers know where not to park. In particular, the parking lot next to Hannah's is a towing hot spot. 5 cars a night can be seen getting towed from that parking lot. The towing company is smart to make sure the tow truck has two drivers on this route, the number of drivers having to pay 220 to get their car back is nearly as bad as the ratio back at the bar's long lines.

In 2011, flexing the muscle of new management, Hailey's exercised a habit of stopping acts that management does not 'agree with',  most recently shutting down a Burlesque Act mid-show when one of the performers, a male, made the owner 'uncomfortable'.  Hailey's new management has also recently changed its long-standing employee base by firing not only seminal bartenders and staff, but Industry-Award-winning resident DJ "YeahDef"  (Joey Liechty) as well, via text.  YeahDef is now hosting at Mable Peabody's on Thursdays.

The story was picked up by the Dallas Observer.

Mulberry Street Bookings, who took their name from the Hailey's Address, has also severed ties with the Club.

They used to be horrendously revolting, but in 2011 had a huge make over.  There aren't even any smashed mirrors now, and the cubicles have doors instead of curtains!

Presumably just got a make over when the men's did.