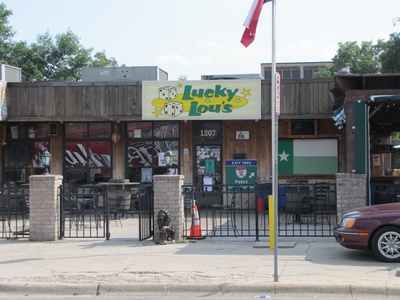 Lucky Lou's is a bar off Fry Street. It is primarily used for getting drunk. The restrooms have chalkboards in them.

They offer free chips and salsa from 4pm -9pm, every day. They also have those silly bar games that get more fun with more drinks. This started out with the "ring game" out front which was a metal ring on a rope that you would try and swing to get it to latch onto a nail in the wall. Recently, the bar has added a bean-bag toss game (a.k.a. corn hole), a giant Jenga game, and giant connect four. There are two pool tables inside, as well as two dart boards. There are two foosball tables (one inside and one outside) and an arcade golf game inside. Mexican Mondays are a great night to enjoy $2 Margaritas, hand mixed right there and taste fantastic. The covered patio section was also added in 2009.

Every Tuesday, they have what is known as "Pint Night". Every week, they have a different featured beer, with a souvenir glass. You are able to take the empty glass home in a paper bag, which is provided to you. The Pint Night sale starts at exactly 9pm and last as long as supplies last. It's a good idea to get there early!

The bar also provides free wi-fi. The password is luckylou.

Happy Hour is from 4pm to 9pm, daily.

The men's restroom is cramped, but as many as four gentlemen can piss at a time. It is, nonetheless, a very intimate situation. It has chalk boards and this thing that lets you open the door with your foot.

There are two women's restrooms. One is single, large bathroom. The other has two separate stalls with a shower curtain door.

Sidenote: This bar is invaded by political science grad students at least once or twice a week, so beware!