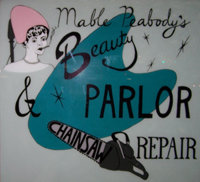 Mable Peabody's Beauty Parlor & Chainsaw Repair, usually called Mable Peabody's or Mable's, is an LGBTQ (or "gay") bar off of University Drive. It is currently (and always has been) the only gay bar in Denton.

Kelly Sanders has owned the bar since the early 1990s. According to an interview, the only public GLBTQ venue in Denton was established by Margaret Honeycutt sometime around 1980.

Around October 2008, it reopened in a new nearby location and has yet to be set on fire or blown up or anything.

The men's restrooms are surprisingly decent for bar restrooms. Sex is rare in these restrooms.

Do NOT park at Papa Murpheys. They always tow, and when we asked the owner why, they were a little hate-crimey about it.

Mables is always trying to improve! If you are a patron and have a suggestion to make your experience better; please don't hesitate to let your bartender know!