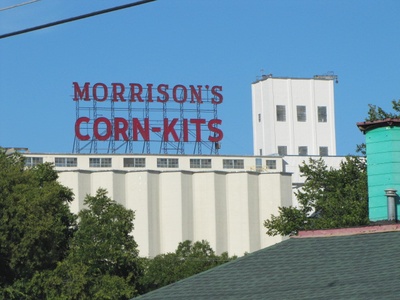 The Morrison's Corn-Kits building is one of Denton's most recognizable landmarks.

The Morrison's Corn-Kits building is a Denton landmark.  It generates much confusion as most people do not know what the hell a corn-kit is.

It is owned by the Morrison Milling Company, which, since 2006, is a subsidiary of C.H. Guenther & Son, Inc. The facility produces boxes of prepared cornbread mix (i.e. corn-kits) which are available for purchase at most Denton and other regional grocery stores. ​

The building is recognized by most everyone who has lived in Denton. It is a popular subject for Denton photographers and appears with altered text on the cover of the Fishboy album Little D. 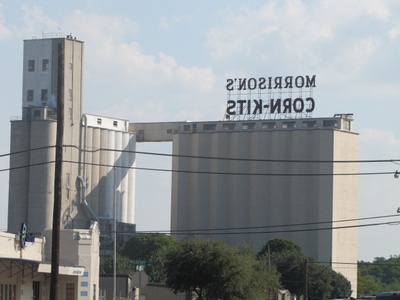 From the back it looks the same, but backwards.

The Morrison Milling Company began in 1886 as the Alliance Milling Company, a farmer's cooperative flour mill, formed by local farmers to mill their wheat into premium flour for North Texas bakers.

The cooperative was successful and became the backbone of the wheat industry around Denton, Texas, selling premium flour to retailers and bakers throughout North Texas. In the 1800s, transportation was a major problem for farmers; so, that flour milling and distribution was a local business.

By the early 1900s, there were several hundred flour mills in Texas. However, as transportation improved, competition increased in the flour market.

Up until the mid 2000s, the "Morrison's Corn-Kits" sign on top of the building was also illuminated in red every night but was discontinued (presumably) due to cost. 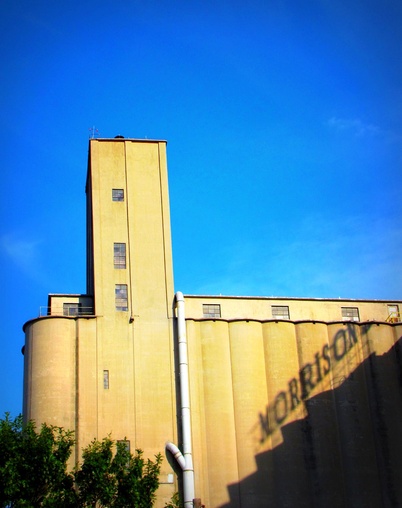