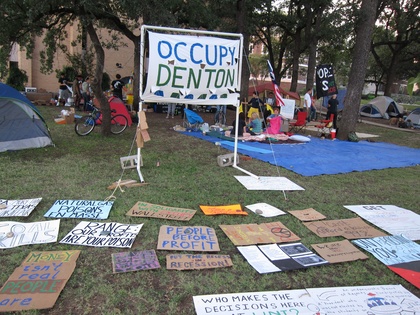 Beginning on October 14th, 2011, Occupy Denton was established in solidarity with Occupy Wall Street and the occupations sweeping the globe. The occupation was on UNT property next to the  Art Building​ with full permission from the university.

Like the other Occupy movements, Occupy Denton is a grassroots, non-heiarchical, nonviolent activist movement seeking to build a local community and enact political and social change in Denton. Although everyone involved has different political motivations and leanings, common themes such as corporatism in politics, uneven distribution of wealth and political corruption apply across the board. During Occupy Denton, events were held at the campsite, such as "The Gender and Sexual Liberation Committee", which discussed issues such as having teach in's on reproductive rights, body image/commodification of sexuality, LGBTQ homelessness/suicide/bullying, etc. Various teach-ins were given by students, professors and outside speakers on a wide range of topics.

Occupy Denton was originally located at Fry Street and Hickory Street in front of the Language Building. In late October, the population ranged from 10 people to 70.  General Assembly was held every night at 5PM and was open to everyone.  The General Assembly was an inclusive planning meeting that utilizes the consensus decision making process.

Occupy Denton moved from their original location on October 30th, 2011 to a new location between the Physics Building and the Art Building.  UNT asked them to move in order to install new lighting in the grass area they were occupying before.

On November 8th, a Facebook page called "Occupy Occupy Denton" was created as a response to, what they felt, was a lack of representation of their personal focuses at Occupy Denton.  The Facebook page doesn't clarify what those issues are.

The Death of Darwin Cox

On the evening of December 3rd, Police were seen at Occupy Denton.  At about 7:30pm, NT Daily's Twitter and Facebook accounts reported that someone had died at the camp.  Since then, numerous news sites have taken up the story.

On Saturday, December 3rd, at 4:30pm, Darwin Cox, age 23, died of what may have been an overdose, though it may take several weeks before the cause of death can be determined.  Occupy Denton has a strict "no alcohol, no drugs" policy, however Cox is said to have had a lifelong struggle with drug addiction.  Cox was given shelter the night of December 2nd, when an occupier saw him with a fever and offered him room in the tent.

Occupiers held a vigil to honor Cox at 7 p.m. on the following Monday on the lawn between the Physics and Art buildings on the UNT campus.

Occupy Denton currently has no physical occupation, since the death of Cox, though they recognize occupation as a tactic that they might utilize in the future.

Occupy Denton has been meeting Monday through Friday evenings at 7pm in the General Academic Building 2nd floor lobby with decision-making General Assemblies on Tuesdays and Fridays.  This might vary over the Winter Break.  Occupy Denton recently held a town hall meeting to address policy issues in the community including but not limited to moving the City of Denton to 100% renewable energy, implementing a moratorium on natural gas drilling and the dangerous practice of “fracking,” helping the homeless instead of criminalizing them, expanding the public transportation and bike lanes systems, and the passing of city council resolution against corporate person-hood.

Forty-five Occupiers mic-checked the city’s Planning and Zoning Commission after it granted a drilling permit to Eagle Ridge, a company which had been operated illegally without one since 2005 rather than imposing the $2,000 a day fines called for by city code. An existing citizen’s anti-fracking network has found a new ally in Occupy Denton with the possibility of a moratorium, the movement that saw an uptick in 2009 hopes to win major victories in 2012.

Members of Occupy Denton are also looking to team up with employees at the University of North Texas in order to stand against a potential new “At Will” policy which would allow for the unceremonious firing of staff without any stated cause.

One of the major hopes of the group is to broaden the involvement from mainly student activists to all members of the community. 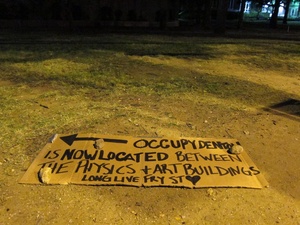 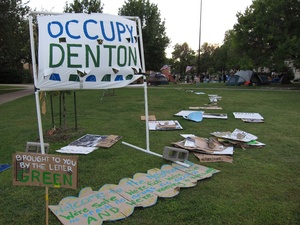 The new location across from the Language Building. 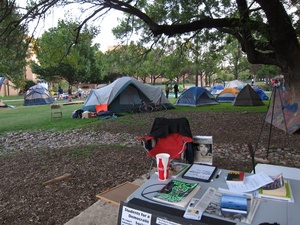 Another angle of the new location. 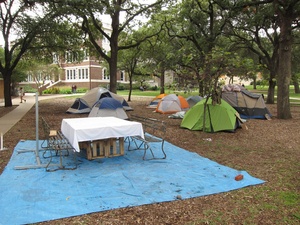 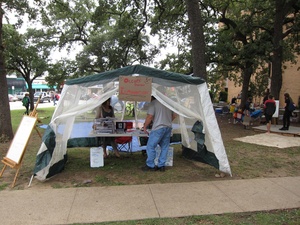 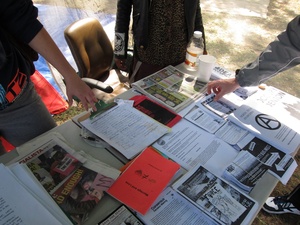 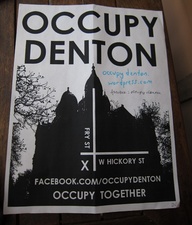 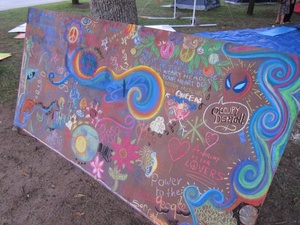 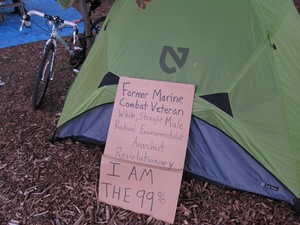