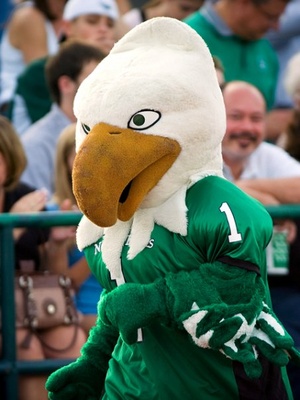 Scrappy at a game.

Having gone by names like "Normalites" and "the Normal Boys," a student petition was started in the Fall of 1921 to decide on an official mascot name. A student-faculty council wanted to choose a name not used by any other major Texas school. Some of the choices debated were Dragons, Eagles, Hawks and Lions. The names were submitted to the student body in January 1922, and on February 1, 1922, students voted for the Eagle.

The eagle mascot was brought to life at the NT-Oklahoma Tech football game on October 6, 1950, when Denton merchant Tommy Laney presented No-Name, a live golden eagle (later discovered to be a Southeast Asian Sea Eagle). A contest was offered to name the new mascot, and Scrappy became the first bird at NT. After living at the NT Club House until spring, Scrappy moved to the Forest Park Zoo in Fort Worth until a permanent cage was built for him in fall 1951.

In 1952, an American bald eagle with a 7-foot wingspan was donated by Warren S. Dill. Students named him Beaky in a February 1952 election. But 540 students quickly signed a petition opposing the name. A runoff election took place and Victor won. Victor would have been the first American bald eagle for NT, but he died of heat exhaustion in August before making an appearance. Scrappy returned to NT making special appearances from 1952 until he died in 1959.

In 1960, a new golden eagle was acquired and named Victor. Then the federal government offered NT an American bald eagle in 1962. The bird, named Scrappy, died before it could be transferred to NT.

In 1963, Mr. Eagle became the first human eagle mascot provided by the NT Marching Band. Marching band director Maurice McAdow and Mrs. Helen Wright of the School of Business Administration designed the costume. It was made of leather and plastic with a chicken wire and paper mache head. Eric Brewster, assistant drum major, "flew" into the stadium for the first NT game of the season.

In 1967, Talons purchased a matched pair of crested serpent eagles, christened Scrappy II and Scrappy III. Housed at the Fort Worth Zoo, Talons brought one of the eagles to each home game. Problems began to arise with the live mascots, so the Talons replaced them with an eagle costume.

In 1969, after obtaining permission from the NT Marching Band, the Talons became the caretakers of Scrappy the Eagle.

In 1971, Scrappy was the name of the mascot and by 1973 the mascot was simply called the North Texas Eagle or the Eagle Mascot. Traditionally, the identity of the person wearing the suit is kept a secret. In 1981, the mascot name was Mean Green Eagle and in 1982 simply Eagle mascot. In 1983, the official mascot name was Eppy.

On September 9, 1995 at the UNT vs. Kansas game at Texas Stadium, a new costume debuted and on December 2, 1995, at the UNT vs. Alabama Crimson Tide game, Scrappy fully returned to service as the official North Texas mascot. 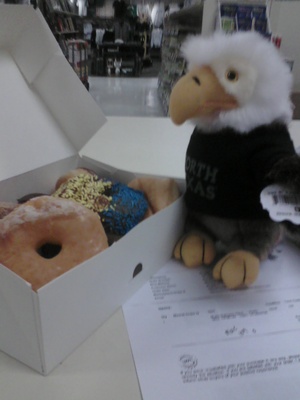 A popular scrappy toy which is actually just a toy eagle with a UNT shirt on, sold at Voertman's. Donuts not included. 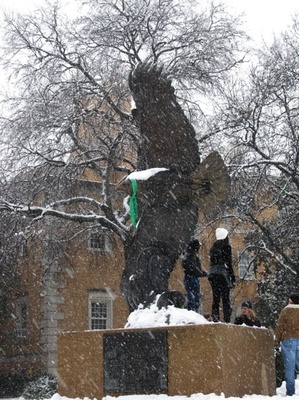 The Eagle Statue wearing a scarf during Snowmageddon.