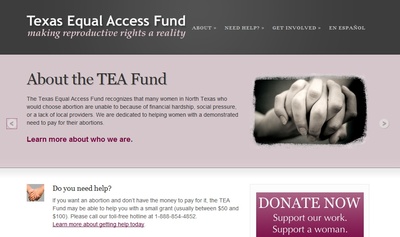 The Texas Equal Access Fund, also known as the TEA Fund \[tee] [fuhnd]\ is a non-profit organization in North Texas which raises money for women who can't afford abortions.

The Texas Equal Access Fund believes that the reproductive rights of women are fundamental human rights. Without the right to control their reproductive destiny, women are not free to enjoy other basic rights such as self-determination, education, economic opportunity, and health​.

The TEA Fund is a grassroots organization that has built itself from a startup organization into a small, but thriving non-profit organization. It was founded by Gretchen Dyer, Samantha Sewell, Lena Glover, Merritt Tierce, Lulu Beall, and Erin Wackerla in January of 2005 (most of these people were FMLA officers at the time).

In the following years, they grew steadily, adding new board members and supporters as their client base increased dramatically. In June 2005, they began raising funds through their TEA Party campaign (yes, they did it first!). In October of 2005, a donation from a major donor gave them the means to increase volume of client services and expand their administrative capacity.

In July of 2006, they helped to found the Clinic Support Coalition of Dallas/Fort Worth to help coordinate clinic escort volunteers. While this organization remains separate from the TEA Fund, they are close allies with their work in protecting physical access to clinics. In September 2006, they expanded their volunteer intake staff, which streamlined administration and freed up board members to work on other necessary tasks.

Since that time, the TEA Fund has grown tremendously, becoming one of the largest and most active abortion funds in the nation. In 2010, they gave more than $150,000 in direct assistance to more than 1,000. They have educated the community about obstacles and restrictions to access experienced by low-income and disadvantaged women, and raised awareness of how unequal access perpetuates gender inequality and social injustice for low-income, minority, and disadvantaged women. They have held public awareness events, like Pro-Choice Speak Out Nights and their play "One in 3". They have supported efforts to address other reproductive justice needs, like comprehensive sexuality education for all youth and access to emergency contraception. They have participated in coalitions with other reproductive justice organizations (like Planned Parenthood of North Texas, S.A.Y. What?, Jane’s Due Process, and NARAL Pro-Choice Texas). The TEA Fund is a vibrant and growing grassroots organization, and they can’t wait to see what you’ll help us do next!

All women should have the financial, educational, social, and emotional resources to make their own reproductive choices.

Access to the full range of reproductive rights is necessary for women to experience equality in society and enjoy other basic rights such as self-determination, education, economic opportunity, and health. As abortion is a fundamental feature of women’s health care, they oppose all efforts to restrict abortion and are committed to fighting for abortion access for all women. Restrictions on abortion access and funding infringe on women’s ability to control their reproductive destinies and are discriminatory because they especially burden poor women, young women, women of color, and rural women. It is the responsibility of government to fund abortions for women in need. In the absence of government funding, they believe it is their duty to act now to support women who want abortions and cannot afford them.

• Reproductive rights are human rights and every woman who chooses abortion should have access. • Every woman is important, none more “worthy” or “deserving” than another; they do not judge. • They value helping women more, not only helping more women. • They understand and respect the importance of upholding privacy, dignity, and confidentiality. • They are one small part of a solution to a very large problem. • They are committed to social justice, including the fights against sexism, racism, classism, and all other forms of oppression.