The Bum Hole is a little nook between Voertman's and Big Mike's.  It has a mural of a forest with flying fish that new artist come and repaint every once and a while.

It was originally an alleyway, and was turned into a nook when Voertman's extended their art department.  It used to be more desolate, but now it has a mural.

Over the years the bum hole has shown many facades; both to graffiti and people alike.

Hobos have been known to frequent the nook, hence the name "the bum hole".  But what's even more interesting are the stories that come from it and the ever-changing characters that have occupied it.  One interesting story about the bum hole is how it got its more unfortunate name "rape alley," supposedly after a homeless person sexually assaulted a student in the alley and then called the police on himself. 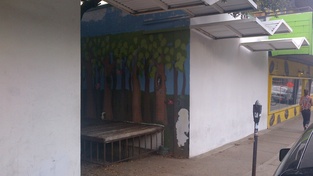 The hole, with Big Mike's in the background 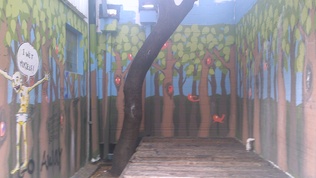 The old man who wet himself wasn't in the original mural.