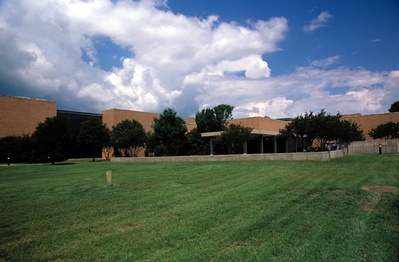 Discovery Park is a large confusingly shaped building owned by UNT. It opened in January 2004 and ​is teeming with computer science and engineering students, which means that it smells like some strangely intoxicating combination of Mountain Dew and cumin.

Discovery Park, in addition to its tech-minded inhabitants, has its own cafeteria with some of the best cheeseburgers in the UNT dining system. It also has a gigantic parking lot just to put mother nature in her place.

The 300+/- acre campus was sold to UNT by Texas Instruments in November 2001 for $8.9 million.  TI had originally opened the site in the early 80s, using it for a variety of military and private sector technology projects which made the company many dollars over the years.