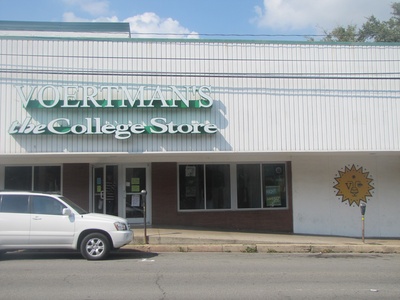 Voertman's is a college supply store, specializing in textbooks and art supplies. They also have UNT themed clothing and gifts.

The parking lot is on the Oak Street side of the store, where there are two exquisite stone lions flanking the doors.

Voertman's buys, sells, and rents textbooks, used and new, mainly for UNT, but also some for TWU..

Voertman's now runs a counter service in which the employee's pull the customers books for them. This way it gives a customer a break so that the employee's do all the work.

Since some recent changes, their textbooks are now very reasonably priced and significantly cheaper than the Barnes and Noble on campus. Students come here to save money.

The school even comes here to save money!  Voertman's has a contract with the Athletic department to provide textbooks to all of the Mean Green athletes.

While some of the smaller gift like items are no longer carried, Voertmans has done a great job of providing Mean Green fanatics with an array of options for clothing, decals, school supplies, and other

accessories to help display their school pride.  It's a must-stop for all returning alumni.

Voertman's has a bountiful supply of art supplies.  Under new ownership and the management of Augie, one of Voertman's tenured staff member's, the Art

department has underwent many changes.  A new layout and floor arrangement was one of the first changes that were made and customers have found that

it is much more spacious and inviting. In recent days, Voertman's has now added an Art Gallery area in the front of the store (on the  Hickory side) which serves as a perfect place for students, alumni, teachers

and Dentonites to take a moment to sit down and relax. They even have free coffee for loyal social bloggers (I'll proudly take a cup next time I pass through). The staff members in the Art department are so

friendly and helpful and never mind coming from behind the counter to assist a customer.

In 1960, Paul Voertman created an annual art competition, the Voertman's Art Show, allowing UNT students to have their work critiqued by art professionals.

Notably, Paul Voertman did not want college students working in the store, preferring to hire only older people. The first college-aged person was hired in the late 70s and had recently graduated with an elementary education degree. Since her success, Voertman began hiring younger people, and now the staff is comprised of both college students and older employees who were originally hired by Voertman himself.

In May 2004, the "t" on the Voertman's sign on the Hickory Street side set on fire.  No real damage was done, just a big old scorch mark.

In 2010, the Paul Voertman Concert Hall in the UNT Music Building was named after the former owner of Voertman's.

Famously, author Anne Rice once told the New York Times, "I remember walking into Voertman's Bookstore and seeing all those racks of books. All this stuff I wasn't supposed to read as a Catholic. Aldous Huxley, Jean-Paul Sartre, Albert Camus. I had to know what was in these books." 1

Voertman's has two parking lots across the street from the store that are rented out by semester to staff and students. Be careful, you will be towed if you are caught in these two parking lots. However, the parking lot directly behind the store is for the customers of Voertman's! 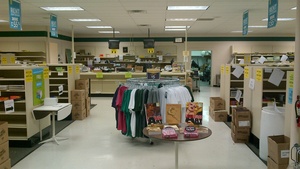 Textbook department on the Oak St side of the store. 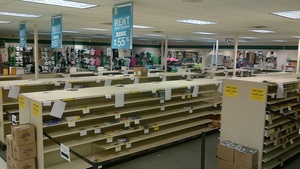 Textbooks, with the clothing department in the background 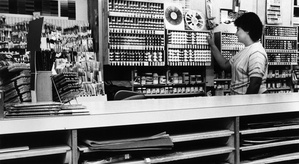 Art department in the 80s or something 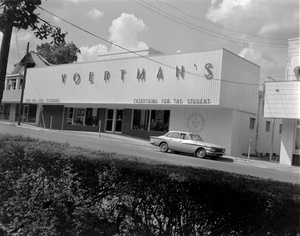 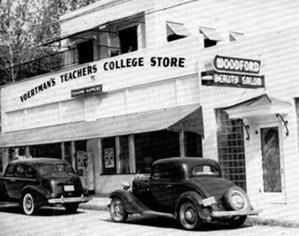