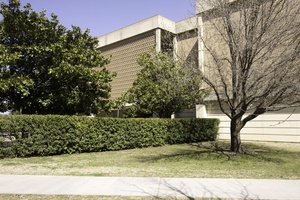 Probably one of the oldest buildings on the UNT campus. Home of a lot of the social science departments (political science, history, economics). Generally pisses people off when they have class there because it is way the fuck on the other side of campus. Also known for having a net to keep birds from nesting and shitting on students. The temperature in Wooten hall can be described as either mordor hot or Antartica cold because the university doesn't want to waste time keeping the hall that house social science majors at a normal temperature. Also known as "Wu-tang hall"