Denton County and its county seat, the city of Denton, were named for John B. Denton, a Methodist circuit preacher and frontier lawyer who was killed in an Indian battle at Village Creek in 1841. Few verified accounts of John B. Denton exist, and even those are often highly romanticized. All agree that he was an eloquent speaker and beloved community leader who left an indelible mark on North Texas.

As more settlers migrated to the frontier, the Republic of Texas relied primarily on volunteer militias to patrol the populated areas spread out across open range. In 1839, Denton answered the call and was commissioned captain of a company in Brig. Gen. Edward H. Tarrant’s Fourth Brigade, Texas Militia. In 1840, Denton lost a bid for Texas Congress but he was made famous in his campaign, beloved by children, respected by elders, and admired by acquaintances. In April 1841 the Ripley family south of his Clarksville homestead was attacked and killed by a horse-rustling party of Indians, so the volunteer Texas militia was tasked with finding the raiders. Denton rallied his Texas Rangers.

By May, Tarrant’s 4th Brigade of Texas rangers led by company commander Capt. James Bourland left Fannin County to find the Indian villages and recover the livestock. Capt. Denton served as an aide to Gen. Tarrant, commanding a detachment of scouts with Henry Stout. On May 24, 1841, the men located a group of Cherokee and Caddo Indian villages along Keechi Village Creek (not far from present-day boundaries between Arlington and Ft. Worth). The scouts reconnoitered the first two villages with little effort, but were met with gunfire at the third. Denton and Stout had split into separate units to scout out the area, each surveying a different route. When their paths converged, Stout stopped but the fiery-tempered Denton charged ahead to boldly engage the encampment.  A fire-fight ensued, wounding Stout but killing Captain Denton almost immediately.  The unit quickly withdrew with the injured Stout but a group later returned to recover Denton’s body. Learning that the Keechi villages contained over a thousand men, now alerted to their presence, Tarrant called the retreat. The fleeing brigade buried Denton’s body under a tree beside the creek as they hastily crossed into what would become Denton County, later so named in honor of the fallen hero.

Yet the story of John B. Denton does not end with the Battle of Village Creek. When a grave was discovered by some boys along Oliver Creek in Denton County in 1856, Denton County rancher John Chisum (who would become a legendary cattleman and one namesake of the famed “Chisholm Trail“) recalled the stories of Denton’s death and burial told to him by his father Clabe, also a member of Denton’s Texas militia company. Chisum investigated with some survivors of the raid, who identified the bones by the blanket they were wrapped in, an old broken arm, a tin cup, and some gold teeth. Chisum took the remains back to his home and kept it in a box hoping a family member would claim it but meanwhile buried Denton’s bones in a corner of the yard near his house. When Chisum sold his property to J.M. Waide years later, he left a written account authenticating the grave with his friend J. W. Gober. By 1900, the Old Settler’s Association of Denton County wanted to bury John B. Denton in the town that proudly bears his name. They placed an advertisement in the paper which Gober answered, producing the letter written by Chisum authenticating the bones and artifacts. The remains of Captain Denton were exhumed once again and buried during a large ceremony on the southeast corner of the Denton County Courthouse lawn on November 21, 1901 (picture below). 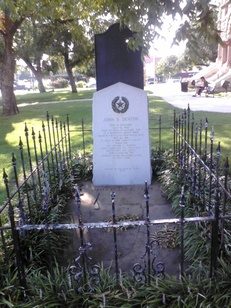 Looking rather dapper for his age. 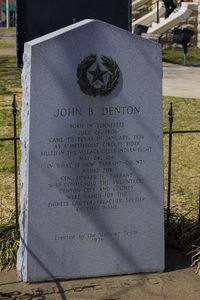 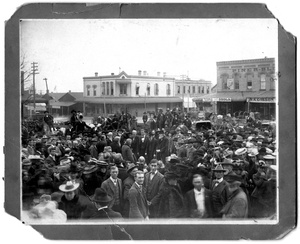 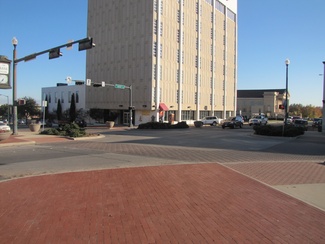