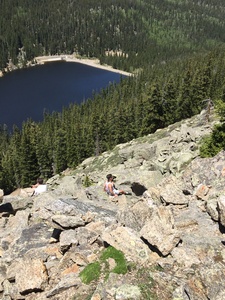 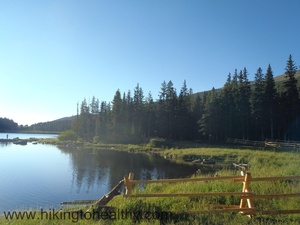 Echo Lake Park is a Denver Mountain Park located near Idaho Springs, Colorado. It is located at 10,600 ft1, making it Denver's only subalpine park. The elevation allows for visitors to experience the beautiful subalpine ecosystem. Echo Lake Park is also the beginning of the Chicago Lakes Hiking Trail. The trailhead is located on the East side of Echo Lake and is a 9.8 mile long hike2. This trail allows visitors to see the abundant wildlife that Colorado has to offer. The trail is known to be home to moose, elk, bighorn sheep, as well as mountain goats 3. This trail also provides access to the Idaho Springs Reservoir, as well the lower and upper Chicago lakes. The park has had a rich history since it was acquired by the city of Denver in 19204.

As visitors first pull up to the Chicago Lakes Trail Head on the East side of Echo Lake, the first thing they will see is Echo Lake's Historic Picnic Shelter. The Picnic Shelter was built in the 1930's and remains as a historic landmark to this day5. The shelter was built by the Civilian Conservation Corps. The shelter is made from Cobblestones and cedar shingle roofing6. It was originally built to serve as a dining area as well as shelter for those camping and visiting the area. It is still used as a picnic shelter, but has seen some renovations in recent years. In 2012 and 2013 the organization HistoriCorps, worked to repair the site after years of neglect. HistoriCorps worked to fix the roofing, stain the woodwork in necessary areas, as well as clean the fireplace7. 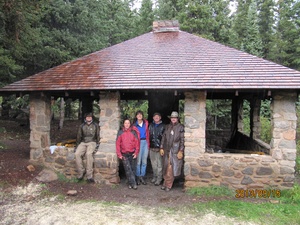 Echo Lake is a naturally created lake, located near the summit of Mount Evans. It was purchased by the city of Denver in 1920. Before it was purchased by Denver it was a private property that was enclosed by National Forest8. Echo Lake Park was a big purchase for the City of Denver because it allowed the Mountain Parks Program to begin the construction of Squaw Pass Road. This road would connect Bergen Park in Evergreen, Colorado to Echo Lake. This was an expensive project and had to be paid for by the State of Colorado, the City of Denver, as well as the USDA Forest Service 9. The road was finished by 1920 and in the later parts of that year was continued so that it would eventually reach the top of Mount Evans.

Six years after Denver purchased the area, the City and County decided to build the Historic Echo Lake Lodge. The lodge was designed as a place of rest for the visitors of the park. The original building was built in 1926 in the shape of an octagon and cost $17,674 to construct10. In 1927 the rest of the building was constructed costing the city of Denver another $10,43211. For years to come the lodge served as a great convenience to those visiting the park. In 1965 the City and County of Denver made the decision to lease the lodge to HWStewart Inc. HWStewart Inc. was a family owned company and is now a fifth generation family owned company that still owns and operates the lodge12. HWStewart Inc. also owned The Crest House on Mount Evans. The Crest House was built between 1939 and 1941. It was then purchased by HWStewart in 195613. The Crest House was built by architect Edwin Francis. Francis was a Colorado Native, born in La Junta, Colorado in 1905. He attending the Historical Denver South High School and studied architecture in Massachusetts14. At the time it was built the Crest House was the highest structure in the whole world. Unfortunately in 1979 a propane explosion caused the structure to explode and catch fire, destroying the historical monument forever15. In 1992 The remains of The Crest House were turned into an observation deck to allow visitors to gaze of the forest surrounding the Mount Evans area. 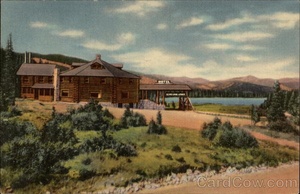 A Painting of the original Echo Lake Lodge
Courtesy of cardcow.com

Another interesting fact this historical area is that it was used by the United States Military during the World War II. During the 1940's US Military troops from the Buckley Air Force Base near Aurora, Colorado used Echo Lake and the surrounding area of Mount Evans to conduct alpine maneuvers16. From Echo Lake it can be seen that the area towards the top of the mountains are treeless allowing for the troops to conduct their training.

During the late 1930's and early 1940's the area was used to study cosmic rays. This was also in relation to World War II. Darol Froman was a nuclear physicist from Harrington, Washington. At the time he was working for a university in Montreal. However, During the summertime he would travel to Echo Lake to work along side fellow physicist Joyce C. Stearns to study cosmic radiation17. These scientists used this area because of its extremely high sub-alpine elevation.

Now, Echo lake is still home to the Historic Echo Lake Lodge. One of the main attractions of this lodge is its restaurant. The restaurant serves up Colorado classics such as buffalo chili and pan fried trout. It is also famous for its delicious pies! Another big attraction of the area is fishing. Visitors are welcome to fish in Echo Lake. Unfortunately swimming is prohibited in the lake, but that shouldn't discourage visitors because a short hike down to the Idaho Springs Reservoir and visitors can go for a swim there. There are many tall rocks that visitors can also jump dive into the cool waters of the lake on a hot summer afternoon. The area is also home to great areas to camp. There are many campsites around the area where visitors can stay and even enjoy a lunch at the Historic picnic site. Echo lake is also very close to all the attractions near Mount Evans. Many cyclists can be seen riding up Squaw Pass Road to get a tough work out and enjoy the beautiful views that the road has to offer. Echo Lake is home to interesting historic sites as well as a beautiful, natural, Colorado landscape.