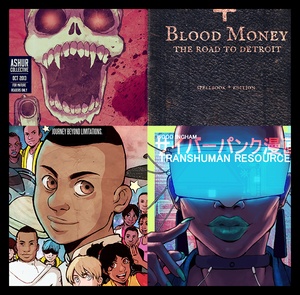 Books published or produced by Ashur Collective.Ashur Collective is a small press that publishes comics and novels. It is co-owned by K. Guillory, a painter from Detroit, and J. Acocella, a writer from New Jersey. Featuring imagery of horror and the macabre, their slogan is "All killer. No filler."

Guillory and Acocella met in 2006. Over the course of several years, they wrote stories of magic and horror together for their own amusement. In 2013, Guillory received a business grant from Wayne State University to publish their first book, Blood Money: The Road To Detroit. Their book release party was sponsored and promoted by clothing label Creep Street, and was held at the Untitled Bottega in October 2013. Two hundred copies of the graphic novel were printed, and nearly sold out in half a year's time.

In March 2014, Acocella and Guillory published their second book, the novelized version of Blood Money (dubbed Spellbook Edition). Guillory overhauled the design of the original book and gave it the appearance of a leatherbound bible. The interior included all-new illustrations that mimicked medieval art. Certain illustrations contained a false language. Upon further inspection, the reader would find the false language to be a cryptogram. In the back, the answer key for all puzzles were presented in the form of holy scripture.

In May 2014, Guillory was hired to produce a comic series for small press House of Essex. Odyssey was written and illustrated by Guillory, and told the story of a young boy born in Detroit who dreamed of becoming an astronaut.

In July 2014, Guillory was hired to produce a cyberpunk graphic novel for British writer Wood Ingham. Transhuman Resources is currently in production and will be published in the United Kingdom. 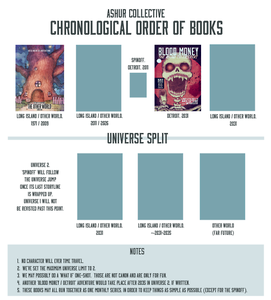 Timeline of planned books by Ashur Collective.Sequel And Publishing Plan

In July 2014, Acocella and Guillory announced a sequel to Blood Money (titled The Other World). In a blog post, they revealed that eigh books belonging to the world of Blood Money have been written. They provided a chart and explained that Blood Money might have been published first, but was actually book #3 on the series timeline.

Ashur Collective's published work focuses on equality and the concept of kyriarchy, as well as favoring material to be read by an older audience.