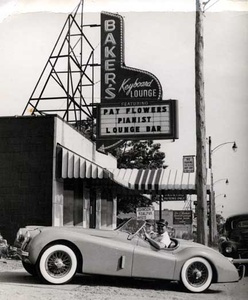 Baker’s Keyboard Lounge, located at 20510 Livernois Avenue at the corner of Eight Mile Road, has long been a landmark in the world of blues and jazz contributing to Detroit’s reputation as a musical mecca well before the birth of Motown or the emergence of alternative rock, rap and techno that came later. Chris Baker opened his restaurant, Baker’s Bar, in 1933 at the northern edge of the city. By 1939, Baker’s son Clarence took over the business and began importing out-of-town pianists for entertainment. The noon-time eatery soon became more of an evening piano bar than a restaurant. In the 1940s, its reputation was established as the place to go to hear some of the most respected local names in jazz perform in a club setting. [1]

Soloists and small instrumental groups dominated the list of performers until the mid-1950s. Clarence Baker began booking modern jazz performers including Dave Brubeck and Gerry Mulligan later in that decade. Legendary singers Ella Fitzgerald, Sarah Vaughn and Nat “King” Cole, and artists such as Miles Davis, Oscar Peterson, Woody Herman, the Modern Jazz Quartet, and Art Tatum, all played at Baker’s. [2]  Remembering her early years, just starting out, Detroit-born legendary jazz singer Sheila Jordan said, “If you got accepted there you were on top.”[3]

Author and music scholar Lars Bjorn drawing from his interviews with Clarence Baker, reports that in contrast to well-known jazz clubs in Paradise Valley or to local bars in predominantly African American neighborhoods, like the Bluebird Inn, Baker’s audiences “were predominantly white through the 1950s.”[4] Clarence Baker was one of a number of club owners who brought outstanding musicians to Detroit attracting an increasingly diverse audience to jazz, and especially to modern jazz. As Miles Davis said in his autobiography, recounting gigs played at Baker’s and the Bluebird Inn in the 1950s – “Detroit was a real hip city for music.” [5]

The Village Vanguard in New York City, established at about the same time as Baker’s, is said to be the only jazz club in the country that might rightfully claim to be older. Baker’s is recognized as the oldest jazz club in continuous operation in Detroit earning its place on the State of Michigan’s Register of Historic Places in 1986. The one-story, yellow brick building has been re-modeled and redecorated over time, but its current Art Deco styling dates to 1952. A large, semi-circular, piano keyboard-design bar dominates the entry area, a motif echoed in the keyboard design featured on its otherwise modest exterior.[6]

The club seats around 100 patrons in the main room, a long narrow space crowded with tables and with booths facing a stage for performers. Art Deco paintings line the walls and contribute to an ambience of cool sophistication.[7]  Unlike a theater or arena, the club provides an intimate setting that invites communication and connection between musicians and their audiences enhancing the musical experience for both.[8]

In the 1970s and 1980s, the public’s musical tastes were shifting to mainstream jazz and hip hop, away from the modern jazz for which the club was known. The most successful jazz musicians were playing much bigger venues – large theaters and later arenas -– which offered them more in revenues based on ticket and merchandising sales than the small clubs ever could. [9]

After almost sixty years as the club’s owner, Clarence Baker sold the business in 1996. The new owners began hiring fewer big names and concentrated on local acts and lesser-known performers as well as R&B and comedy acts. The business was sold again in 2011. The current owners are starting to book internationally known jazz musicians again continuing Baker’s tradition of providing Detroiters with the opportunity to enjoy the best of jazz in a club setting.[10]