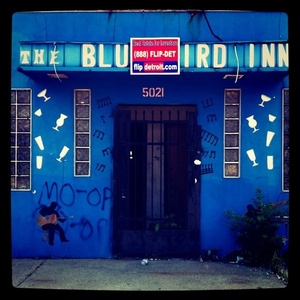 The Blue Bird Inn is a historic jazz club located at 5021 Tireman in the city of Detroit.  The building's original use and year of construction are currently unknown, but it was functioning as a club by the late 1930s.  Many of the nation's most acclaimed jazz musicians played in this club in the late 50s and early 60s.

The Blue Bird Inn began as a neighborhood bar with one exception: it played strictly modern jazz acts several days a week. Established around 1938 by Robert DuBois, who left his job at Ford Motor Company after saving up enough money to start the business, it gradually became the hangout for jazz musicians of the period. The bright blue storefront exterior, painted with the silhouettes of musicians, is all that remains as a physical reminder of the historic jazz club that once graced the now vacant building.

Although the club had intermittently hosted live music since the 1930s, when a new form of jazz called bebop, which was better suited to listening rather than to dancing, developed in the early to mid 1940s, the Blue Bird Inn transitioned to this music style. Reynolds Farley has stated that "A major change occurred in autumn 1948 when the management of the Blue Bird decided that it would specialize in the presentation of modern jazz."  Lars Bjorn and Jim Gallert also trace the birth of the Blue Bird Inn's most significant era to that year, and connect it especially with the introduction of pianist Phil Hill's assembly of a house band.  Other accounts date the transition to a jazz-centric club much earlier.  Jim Dulzo wrote that the Blue Bird "started booking the most modern stuff" in 1941. Nevertheless,the Blue Bird became one of Detroit’s most popular jazz venues from 1948 continuing into the 1970s.

Porter Crutcher recalled that "It was a nice place, very contemporary," but not as swank as downtown's Three Sixes Bar.  "It was just a neighborhood bar," he concluded.Pepper Adams, baritonist at the club during the 1950s, describes the atmosphere of the Blue Bird as a simple neighborhood venue, not as fancy as some of the other Detroit establishments. “The Blue Bird [was]… a marvellous club. Very unique in this way. And I think the way a jazz club should be when it was at its peak. Great place. Great atmosphere. Nothing phony about it in any way. No pretensions and great swinging music.”

Bjorn and Gallert have evaluated the Blue Bird in more grandiose terms.  "Those who visited the place were first struck with its distinctive exterior - a pure blue facade accented with a New York City-style awning that ran across the sidewalk and right up to the curb. It was just as attractive inside," and featured a fine sound system and minimalistic bandstand.

Nevertheless, owner Clarence Eddings1 booked a number of nationally acclaimed acts at the Blue Bird Inn, including Miles Davis,  Cannonball Adderly, Max Roach, Clifford Brown, Charlie Parker, and Sonny Stitt.  One night Stitt got into an argument with Eddings, and complained to the musician's union, resulting in the bar being closed down temporarily.  The bar was a magnet for younger local musicians looking to experiment with bebop.  "The musicians who take chorus after chorus on the bandstand," according to a contemporary Michigan Chronicle article, "are just about the most uninhibited, relaxed and frenetic bunch of men in the city."  Local artists Phil Hill and his band, Tommy Flanagan, Wardell Gray, and Frank Foster gained national prominence during the 1950s.  For Porter Crutcher, "the Bluebird [sic] was very much at the center" of Detroit's bop scene.  Flanagan recalled later that "Everyone who loved jazz in Detroit came. We were always able to play what we wanted to play, and the people liked what they heard."

In his autobiography, Miles Davis writes that while living in Detroit for five months during 1953-54 he was a guest soloist for Billy Mitchell's house band at the Blue Bird Inn.  "People were packing in to see us when we played," and he also share the stage with locals like Thad Jones, Yusef Lateef, and Betty Carter, among others.

According to a 1964 Courier music poll, the Blue Bird Inn was tied for 15th most popular "Nite Spot" in the city.

Blue Bird was the focal point of Detroit’s modern jazz community and, through extension, the country. A series of house bands dominated the music scene. These groups also accompanied various touring artists and locals who sat in on music sessions.

The patronage of the Blue Bird was largely composed of three broad groups: local neighbourhood people, jazz enthusiasts from around the city, and modernist musicians. Although the relative size of each audience segment is sometimes contested, many observers have said that the people frequenting the Blue Bird were not from the immediate neighborhood. Two facts are agreed upon, however: The Blue Bird’s was a knowledgeable audience and it included only a handful of whites. Pepper Adams notes, “the clientele at the Blue Bird was 99 1/2 percent black, it was strictly a black scene – in which I felt no uneasiness at all.” Unfortunately, the Blue Bird’s popularity declined in the ‘70s as its patrons moved on to more appealing neighborhoods as they became available elsewhere in the city. For a long time, occasional “reunion gigs” were held at the venue.

Pianist Barry Harris recounted in a 1979 interview with Contemporary Keyboard magazine that the Blue Bird was the best club. "When I was a young cat, I used to go the Bluebird [sic] and stand out front; the bandstand was right by the front window. . . We really had a ball in that place."

After Eddings died in 1993, the club continued to Lars Bjorn wrote in an article that

Tommy Flanagan remembers the Blue Bird as “beautiful club with all the atmosphere that is not in Detroit anymore. It’s gone for that matter practically everywhere in the country. I never saw a place like that even in New York.”

Although the musicians are long gone, the structure serves as an artifact of Detroit’s lively past music scene. These physical remains speak to the rich historical background waiting to be uncovered and rediscovered by Detroiters and jazz enthusiasts alike.