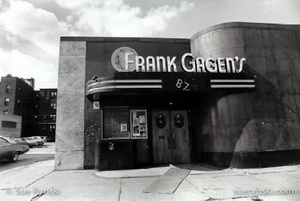 By the late 1970s, the Detroit rock scene that had thrived in the late 60s and early seventies with bands like the MC5 and the Stooges was a distant memory.  Rock venues like the Grande Ballroom had shut down in 1972, and with the rise of disco few bar owners wanted to pay a band when they could hire a DJ for less.  Other than big national acts, there was no place in the city for bands to play.

Frank Gagen’s was originally an old swanky supper club on West McNichols St in Highland Park that had opened in the 1930s.  By the 1970s, that neighborhood became home to a number of gay bars, and Gagen’s was operating as a gay disco and drag club.  In the late 70s business was failing so the owner Sam Stewart decided to let a local punk band, The Sillies, book a few shows.  The bar got so much business over the first weekend that Stewart decided to hand over show-booking to The Sillies permanently.

The bar was renamed “Bookie’s Club 870” after a nickname for Stewart and the street address (870 W McNichols), though the Sign on the building still identified it as “Frank Gagen’s.”  The venue quickly became the hub of Detroit’s punk, new wave, and underground rock & roll scenes.

Local bands such as Destroy All Monsters (with Ron Asheton of the Stooges and Mike Davis of the MC5), Sonic’s Rendezvous Band (with Fred Sonic Smith of the MC5 and Scott Asheton of the Stooges), The Romantics, and The Sillies played there constantly.  As a result of the popularity of Bookies, radio stations and record labels in Detroit that had previously ignored local punk and new wave acts began to pay attention.

National acts such as The Police, The Cramps, The Dead Boys, The Misfits, and Joan Jett & The Blackhearts along with many others also played at the club during its brief existence.  Many others such as David Bowie, Elvis Costello, and Blondie came just to see Bookie’s after playing shows at larger Detroit Venues.

After a concert promotion company took over the club and a number of other bars began to emulate Bookie’s format, interest began to fade.  Stewart sold the bar in 1982 to somebody who turned it back into a drag show bar.  In 1988 the building that housed Bookie’s was destroyed in a fire and was torn down.  Today, all that is left at the location is a parking lot next to a liquor store.

Looking at the club from an archaeological perspective, because nothing remains at the location there is very little to document or study.  The only things that remain are photos, event flyers, a few videos, and the stories that people remember from the club.