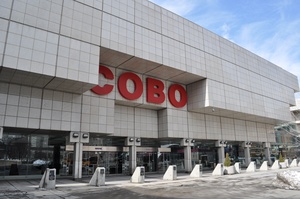 Cobo Center was formerly called Cobo Hall and Cobo Arena.  It is a large convention venue located along Jefferson Avenue in downtown Detroit at 1 Washington Boulevard.  It is named after Albert E. Cobo,1 the mayor of Detroit from 1950 – 1957.   It was designed by Gino Rossetti and its doors opened in 1960.  Renovations to the building structure took place in 1989 and 2012.  The current 2,400,000 square foot complex contains 723,000 square feet of exhibition space, with 623,000 square feet contiguous.  The current owner of the property is the Detroit Regional Convention Facility Authority (operated by SMG).  The five-member Authority Board consists of one representative from each of five government agencies – the City of Detroit, State of Michigan and the three metro-Detroit counties of Wayne, Oakland and Macomb.2

Along with the Joe Louis Arena, the Cobo Center is served by the Detroit People Mover, and has its own station.  The People Mover connects convention and event attendees to area hotels, restaurants, and entertainment venues.  Cobo Center has several attached parking structures, including the spiral ramp to the rooftop parking and direct access to the US 10 the Lodge Freeway.

Today, Cobo Center is the home of the North American International Auto Show, which is held every January and the Autorama each March. These are both popular events attracting an international following, as well as local crowds to see the latest in automotive innovations and specialties respectively.

Originally, the Cobo Center and its attached arena cost $56 million and took four years to complete.  It is located on the site where Antoine de la Mothe Cadillac supposedly first set foot when he landed on the banks of the Detroit River in July 1701 and claimed the area for France in the name of King Louis XIV.3  Construction of the Cobo Arena revealed a number of historical archaeological remains, including the intact kitchen from a mid-19th Century hotel. The archaeological deposits were excavated by Wayne State University students and employees of CRM firm Gilbert?Commonwealth and the artifacts are held at the Gordon L. Grosscup Museum of Anthropology at Wayne State University. The collection includes an array of white clay smoking pipes, 19th-Century ceramics, and other household goods 4. 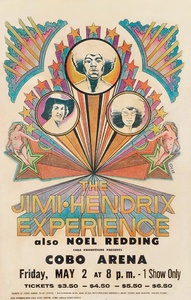 The first convention was held at Cobo by the Florists’ Telegraph Delivery (FTD).  The first event was the 43rd Auto Industry Dinner on October 17, 1960 to which President Dwight D. Eisenhower was the keynote speaker and aired live on WXYZ.5

Cobo Arena was a 12,000-seat venue attached to the Cobo Center that was renovated for adaptive reuse and reopened in September 2013 as a 40,000 square foot ballroom, 21 additional meeting rooms, and a 30,000 square-foot three-story glass atrium overlooking the Detroit River.6

In the early 1970s when more and more people were attending concerts, outgrowing venues such as the Grande Ballroom, Eastown Theater, and Vanity Ballroom, astute promoters such as “Uncle” Russ Gibb and others began booking concerts in larger venues such as the Masonic Temple, Olympia, and the Michigan Theater.  It seemed Cobo Hall would also be a good fit for hosting these larger concerts.

Cobo is important to the understanding of how music was viewed and attended in Detroit.  It was a large venue that could accommodate big crowds, but was easily accessible to Detroit residents and people coming from the suburbs via the network of highways.  Archaeologically and historically it is important because it demonstrates the need for increasing space to showcase bands and their fans desire to see them.  Cobo did not have the same system in place as Grande Ballroom, Eastown Theater, and Vanity Ballroom with their use of posters and handbills, but they did have advertisements and sales of t-shirt, buttons, posters, band booklets, etc., which would contribute to the archaeological record as tangible artifacts.  Many people save this sort of memorabilia and bands have even made large profits off the sale of band merchandise. 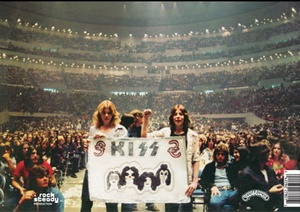 Detail from album cover from KISS's 1976 Alive! album recorded at Cobo Hall in 1975

A documentary was made about Cobo Hall called, “The Legendary Cobo – 50 Years of An American Icon,” and members from various bands who performed at Cobo Arena were interviewed.  Detroit native Chad Smith told his story of attending the 1975 KISS Alive! show with his brother where he witnessed Fin Costello take the famous album cover photo for Kiss’s Alive Album recorded at Cobo.  Gene Simmons and Paul Stanley were also interviewed and expressed that the Alive Concert would forever link Kiss with Detroit and Cobo Hall.  This type of musical documentary creates a lasting legacy which people can view again and again and reminisce about the concerts, the bands, and their experiences.11

Unlike many other concert venues, Cobo Hall still exists and is utilized on a regular basis for conventions, conferences, and events.  The North American Auto Show continues to be a huge draw each year.  Though it no longer host concerts like it did from the 1970s through the early 2000s at Cobo Arena, it is still an important cultural icon and was the crux of many important moments in musical history in the City of Detroit.  Cobo Arena acted as a “live” recording studio for The Doors (1970), Bob Seger (1975), KISS (1975), Yes (1976), Madonna (1985), and Kid Rock (2004).12

Cobo Center became a Lighthouse facility in 2011 with the Detroit’s Project Lighthouse, a security partnership with 30 other downtown facilities to combine security information and resources, 24 hours a day, seven days a week, to assist those in need in the Downtown Detroit area.  Each Lighthouse facility works with a network of major law enforcement units, which include the Detroit Police Department, Customs and Border Patrol, Homeland Security and the local Coast Guard.13