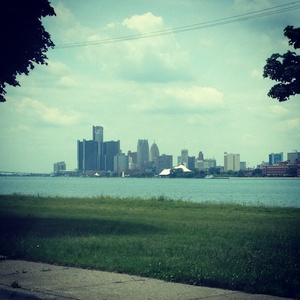 in the state. It is a primary business, cultural, financial and transportation center in the Metro Detroit area, a region of 5.2 million people, and serves as a major port on the Detroit River connecting the Great Lakes system to the Saint Lawrence Seaway. It was founded on July 24, 1701, by the French explorer and adventurer Antoine Laumet de La Mothe, sieur de Cadillac.

Known as the world's traditional automotive center, "Detroit" is a metonym for the American automobile industry and an important source of popular music legacies celebrated by the city's two familiar nicknames, the Motor City and Motown. Other nicknames arose in the 20th century, including City of Champions beginning in the 1930s for its successes in individual and team sport, The D, D-Town, Hockeytown (a trademark owned by the city's NHL club, the Red Wings), Rock City (after the Kiss song "Detroit Rock City"), and The 313 (its telephone area code). Detroit's auto industry was an important element of the American "Arsenal of Democracy" supporting the Allied powers during World War II.

Between 2000 and 2010 the city's population fell by 25 percent, changing its ranking from the nation's 10th largest city to 18th. In 2010, the city had a population of 713,777, more than a 60 percent drop down from a peak population of over 1.8 million at the 1950 census, indicating a serious and long-running decline of Detroit's economic strength. Commensurate with the shift of population and jobs to its suburbs or other states, the city has had to adjust its role within the larger metropolitan area. Downtown Detroit has seen an increased role as an entertainment hub in the 21st century, with the opening of three casinos, new stadiums, and a riverfront revitalization project. However, many neighborhoods remain distressed. The state governor declared a financial emergency in March 2013, appointing an emergency manager. On July 18, 2013, Detroit filed the largest municipal bankruptcy case in U.S. history.