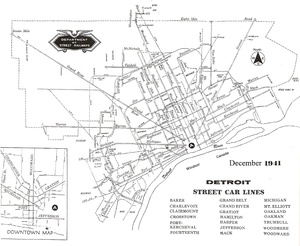 1941 Street Car System MapA large system (187 miles) was built by the Detroit United Railway in the 1900s through the 1920s. The system began to be sold to the  Detroit Department of Street Railways​ in 1922. The last streetcars were discontinued on April 8, 1956.

The City of Detroit entered into a bidding competition with Kansas City to sell its electric-powered streetcars to Mexico City in 1955. The City sold 183 cars for a total of $699,000.

THE P.C.C. ERA IN DETROIT on Detroit Transit History