History of the Eastown Theatre

Detroit’s Eastown Theatre located at 8041 Harper Avenue in Detroit began showing movies in 1931.   The Eastown opened in a largely residential neighborhood on Harper near Van Dyke at 6:30 p.m. on October 1, 1931, with the movie “Sporting Blood” starring Clark Gable.1  Advertisements in the newspaper at the time declared the theater’s opening as a new entertainment era and invited people to partake of the newest and finest in theater viewing.  Business owners and merchants in the surrounding neighborhood even pitched in by decorating streets for the Eastown’s grand opening.

Eastown was a 2,500 seat theater and was comparable in size and elegance to other downtown theaters.  The Eastown was built solely for the showing of “talking pictures” and tickets were 15 cents for afternoon showings and a quarter for evenings.  Saturday and Sunday showings were 35 cents.  Children were admitted at any time for 10 cents.  Patrons would normally dress up for a night at the movies and uniformed ushers were there to show them to their seats.2

The complex was built by the Wisper & Wetsmen3 movie chain, one of the largest independent operators of movie theaters in metro Detroit.  The building itself was designed by architect V. J. Waier,4 who used a blend of Renaissance Revival styles, including Spanish and Italian classic Baroque and Neo-Classic elements.5 It is the only known building of V. J. Waier’s to survive in Detroit.  The building was constructed between 1926 and 1930 and featured a 6-foot high lit dome in the auditorium with a gold-gilded ceiling.  The lobby featured imported marble with a wide, elegant stairway that flowed to the mezzanine.  Like most of the theaters in downtown Detroit, the Eastown had office space and stores, but it also had 35 apartments.  In addition, it had the grand Eastown Ballroom, with large arched windows, a band shell, and an oak dance floor.

The Eastown spent four decades as a movie house until it closed in 1967.  At around the same time, many old movie houses and ballrooms, like the Grande Ballroom and the Michigan Theatre, were being transformed into rock concert venues.6  The once opulent movie theater was stripped of adornment and its seats were ripped out in order to pack more people onto the cement floor space.  It was at this time that the Eastown became one of the foremost places to see rock and roll shows in town and one of the most notorious concert halls in the Midwest.7 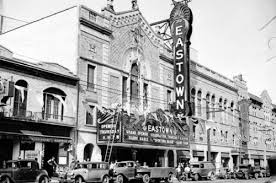 On May 29, 1969, the theater reopened debuting its first rock show, with SRC as the headliner.  Tickets at the time cost from $3 to $5 to see bands like the Who, the Kinks, Yes, Fleetwood Mac, the Faces with Rod Stewart, Jefferson Airplane, King Crimson, the James Gang, Cream, Steppenwolf, Captain Beefheart, Rush, Muddy Waters, War, Pink Floyd, Canned Heat, Savoy Brown, Mott The Hoople, Leon Russell, Savage Grace, Jethro Tull, Procol Harum, Alice Cooper, Traffic, Derrick & the Dominoes, Frut, The Paul Butterfield Blues Band, The Allman Brothers Band, Wishbone Ash, T-Rex, Boz Scaggs, The Soft Machine, Humble Pie, The Grateful Dead, Joe Walsh, REO Speedwagon, as well as local bands like the MC5, the Stooges, Mitch Ryder and the Detroit Wheels, Bob Seger, Ted Nugent and the Amboy Dukes, and SRC.8, 9   Ted Nugent and the Amboy Dukes recorded “Survival of the Fittest” album at the Eastown and Joe Cocker began his “Mad Dogs and Englishmen” tour at the Eastown.10  This is the venue where Alice Cooper first started wearing a Top Hat on stage that he found in a dumpster behind the Eastown.11

While the Grande Ballroom had a definite hippie vibe, the Eastown was mostly blue-collar and rough.12  The Eastown was referred to as a musical “dope den” and was considered a veritable drug supermarket and major nuisance for the then-Mayor Roman Gribbs.  Despite two deaths associated with the Eastown within four months, several drug arrests, twenty violations issued by the Detroit Fire Department, and operating without a city business license for nearly a year, the Eastown continued to host rock shows.  The legal capacity for the theater was 1,727, but on some nights it drew crowds of over 3,000.  Eventually, violations for overcrowding and rampant drug use sounded the death knell for the Eastown.13

The Detroit Free Press published an expose on the Eastown dealers who sold everything from marijuana, mescaline, amphetamines, barbiturates, LSD, cocaine, and heroin14 almost every weekend with no fear of management, the theater security force or the Detroit Police.  Angry residents and parents insisted that the city step in, and Mayor Gribbs retracted the Eastown’s licenses citing violations of city health and safety codes.  A week later, a federal judge declined to overturn Mayor Gribb’s orders and the Eastown stayed closed. 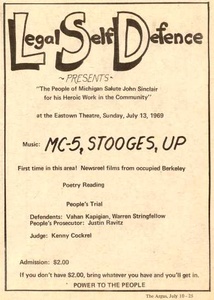 The Eastown under the name Eastown Productions Inc. reopened briefly under new management for a few shows over a couple of months in 1973.  Gribbs approved the reopening, but eventually withdrew his support following protests from neighborhood groups and area residents.  Joe Walsh and REO Speedwagon played for the reopening show on July 19, 1973, but 50 protesters picketed and several minor shoving incidents happened between concertgoers and demonstrators.  Four youths suffering from drug overdoses were taken to an area hospital and the city wound up denying the Eastown permits and the battle returned to court where a judge ruled that the Eastown would legally be closed down.15

In late 1975 or early 1976, the Eastown was renamed the Showcase Theater and reopened as a play, music and jazz hall venue with 2,000 seats reinstalled.   Chris Jaszcak, Gary MacDonald, and Mike Jeanguenat who were high school friends and one-time Eastown regulars16 who loved the theater took over the management, but they were newcomers to the entertainment business.  They booked musicians like Ravi Shankar, Tom Waits, Pat Metheny, and the Godfather of Soul, James Brown, who played the Showcase in 1976.  After about a year and a half, Jaszczak said he’d had enough because of problems with neighborhood gangs.

In 1980, the Eastown Theatre began to show avant-garde and exploitation adult films under the Showcase theater name, but it closed again in 1984.17

The Showcase/Eastown functioned briefly as a theater by Detroit Center for the Performing Arts from 1984 -1990s staging professional theater productions, children’s plays, educational plays, and acting workshops, but it didn’t last because of the Eastown’s less than desirable location.  At its high point the Detroit Center for the Performing Arts18,19 entertained 30,000 people a year with its adult and youth theaters.  While the building may have been sound, it still looked vacant and condemned, and was filled with rubble and debris.  The DCPA planned to spend $2 - $6 million to restore the building but the project floundered and the Eastown closed again. 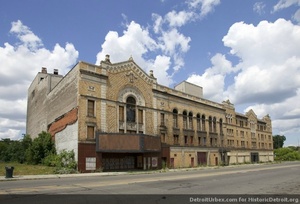 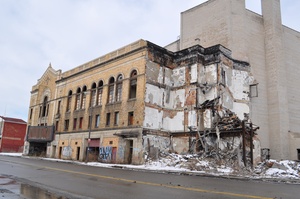 In the mid- to late 1990s, the Eastown became infamous as a site for raves attended by hundreds of people. Though in bad shape, the theater still clung to much of its past grandeur.  The exotic chandeliers still dangled from the ceiling and the beautiful tapestries still framed the stage.  Its electric blue seats were still there, though a bit ragged and musty.20, 21, 22

Then an area church group called Deeper Life Ministries23 took over, housing some of its congregation in the complex’s apartments with the intention of converting the auditorium into a place of worship.  In 2004, when the church was unable to follow through it tried to sell the property several times for $2 million and again in late 2009 for $1 million.  The building was abandoned and took a turn for the worse.  Holes in the roof led to severe deterioration of interior architectural details.  Fire gutted half of the apartments in the complex and architectural salvagers looted details from the building’s roof.  The office building caught fire in the summer of 2010 and again in November 2010, the city of Detroit condemned the building and placed demolition notices on the building.  Part of the building was taken down after the fire, but the theater and ballroom are still standing.24

This building is a significant site of Detroit’s music history because it has a rich, varied past.   It functioned as multiple types of spaces; it was a theater, but it also had shops and offices and apartments.  It lived in many incarnations, from grand theater, to rock venue, to a theater hosting plays and concerts of various musical genres - from rock and roll, to jazz and Motown.  Though it has been abused, neglected, abandoned, and the victim of arson, a glimpse of what a grand dame this theater once was still survives.  It is important to preserve a record of special buildings like the Eastown Theatre, even if we cannot prevent their demise.