K. Guillory (author name of Kelly Guillory) is the artist of the graphic novel Blood Money: The Road to Detroit (story co-written with J. Acocella), Odyssey, and Transhuman Resources. She has exhibited at Untitled Bottega, Corktown Studios, Red Bull House of Art and other galleries in Detroit. She is the co-founder of small press Ashur Collective. 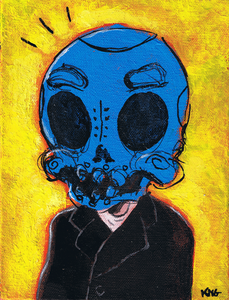 Guillory's art is known for its colorful, dreamy acrylics set against sumi ink. Her oil paintings utilize scuffling and small canvases. Guillory has said she prefers smaller canvases for painting. Some of her paintings include The Spirit of Detroit and a portrait of Michelle Tanguay.

During art festivals and gatherings, Guillory has donned large paper mache masks with unusual shapes (a skull or a piece of cake). She credits her creole heritage for the inspiration, stating her parents taught her how to make large-scale masks during Mardi Gras.

Her work is collected as far as Austria.

Guillory is associated with Artrages Gallery (2009-10), Hopscotch Detroit (2012), Untitled Bottega (2012-14), North End Studios (2012), Corktown Studios (2013), and Grand River Creative Corridor/4731 Building (2013-14). She is one of the youngest artists to illustrate the Dally In The Alley poster, having done so in her early teens. She's also participated in the Detroit Design Festival.

The South End:  Student Finds Artistic Icing On The Cake Through Different Mediums, Avenues Of Expression, 3/27/13