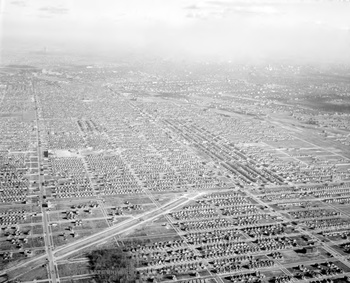 Housing in Detroit in 1929. Photo courtesy Virtual Motor CityThe concept of a neighborhood in Detroit is very fuzzy. Most don't have official boundaries, and nearly all have changed over time. Some of the most prominent include Palmer Woods, Sherwood Forest, Indian Village, East English Village, Corktown, Hubbard Farms, and North Rosedale Park. There's a map of Zillow's sense of Detroit's neighborhoods on the Detroit Data Collaborative. ​

In 2003, Arthur Mullen and Andrew Koper attempted to map all of Detroit's neighborhoods and inadvertently developed a neighborhood scheme that was adopted by many larger mapping companies like Google, which in turn led to others utilizing that information from Google.

No standardized naming conventions exist. City planners have divided the city into 10 clusters for convenience. The city's master plan has several target neighborhoods, and large foundations like Skillman and Kresge have defined their own operating boundaries. Most residential neighborhoods, however, are more often referred to by their closest intersection (i.e., Seven Mile and Dequindre), not a neighborhood name. One 2011 report said that demographers have identified 100 distinct neighborhoods.

Some historical neighborhoods, including Black Bottom and Paradise Valley, were demolished and replaced during the era of urban renewal.