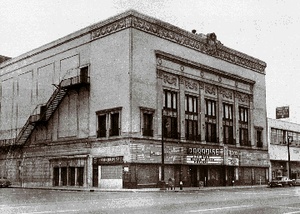 Paradise Theatre, located at 3711 Woodward Ave., is arguably the most important venue during the 1940s for black musical entertainment in Detroit. It hosted renowned jazz musicians, including Ella Fitzgerald, Billie Holiday, Count Basie, and Duke Ellington. Currently the home of the Detroit Symphony Orchestra, the building is listed on the National Register of Historic Places and has a rich history in musical tradition.

When the Detroit Symphony Orchestra left Orchestra Hall in 1939, the venue became a moving picture and vaudeville house renamed the Town Theatre[1]. On Christmas Eve 1941, under new owners Ben and Lou Cohen, the building opened as the Paradise Theatre.[2] For the next ten years, the Paradise flourished as the central gathering point for Detroit’s jazz and rhythm and blues scene. The talents of local and leading jazz musicians began to draw vast crowds in the very place that Detroiters once flocked to hear the works of major classical composers.

The theater’s name was derived from the Paradise Valley neighborhood that was located east of Woodward Avenue. This area was the business and entertainment center for a large percentage of Detroit’s African-American community, situated in the residential area known as Black Bottom from the 1920s in the 1950s[3]. The Paradise Theatre became a highly celebrated club, featuring the best jazz, bebop and blues artists of the time. On the DSO’s website, they claim that “the theatre was as important to Detroit as the Apollo Theatre was to Harlem”.[4]

For many reasons, the Paradise Theatre was an excellent music venue. Constructed in 1919 for the DSO, the building first seated 2,250 and later expanded to 3,000[5]. Most importantly, the concert hall possesses a very special quality in what is generally considered to be perfect acoustics.

When the golden era of big band jazz began to wane, the Paradise Theatre was forced to close in 1951.  The hall sat vacant for many years and began deteriorate rapidly until a movement was undertaken by a DSO musician to rediscover the hall and raise funds to restore it[6]. Old photographs and historical documentation were studied to ensure the delicate design work and architectural details were replicated in an effort to maintain the building’s historical integrity. All of the extensive restoration work was carefully completed to ensure the excellent acoustic properties that the hall was historically known for has remained intact. Finally after 20 years of restoration, $6.8 million, and thousands of donated hours, DSO moved back into Orchestra Hall in 1989[7].