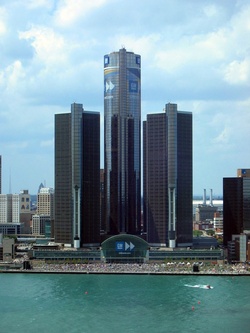 The Renaissance Center (nicknamed the Ren Cen) is a group of seven skyscrapers located in downtown Detroit along the riverfront. Henry Ford II first proposed building the Ren Cen in 1971 to help revitalize the central business district. It has been criticized since for drawing business away from other skyscrapers and being closed off to the public (originally, imposing concrete berms faced Jefferson Avenue).

In 2004, General Motors, the current owner and principal occupant, completed a renovation of the Ren Cen that made the towers more accessible to the street. The renovation was done in conjunction with the redevelopment of the riverfront by the Detroit Riverfront Conservatory.