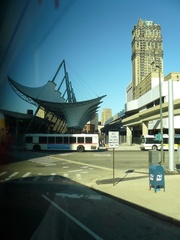 A 257,000 square foot building on a 2.4-acre site. Located at the corner of Michigan Avenue and Cass Avenue between the Michigan and Times Square stations of the People Mover. Completed in 2009 at a cost of $22.5 million, the facility and has 15 bays for 27 Detroit Department of Transportation bus routes, a taxi stand serving two Megabus routes, and connections to the SMART system, Transit Windsor Tunnel Bus and People Mover.

A police mini-station is planned for the center. See also: DDOT Police.

The DDOT Director is Lovevett Williams.

Designed by Tushar Advani of the international infrastructure firm Parsons Brinckerhoff, which has an office on Griswold.

AT&T had an undocumented underground duct system at the site, which slowed construction.

Security layoffs by the Detroit General Services Department reduced the RPTC's hours from 12:30 to 10pm on December 31, 2009, and closed the facility on January 2, 2010.

In January and February 2010, the RPTC had been plagued by unscheduled closures due to security staff layoffs (6 of the 16 guards were laid off). The Free Press reports a spike in crime, including drug dealing, robberies, and public cat washing.