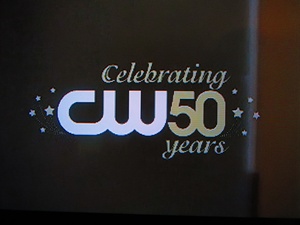 50 used this logo bug during 2015 to remind us that they have been around since 1965-that's 50 years.Remember the catchy "In Detroit, the choice is yours, on TV 50!" ident, their 10 PM newscast "Michigan's only primetime newscast, the Ten O'Clock News...", Tigers, Red Wings and Pistons game telecasts or people like Lou Gordon, Bill Kennedy, Ray Lane, Woody Willis and Sgt. Sacto? Those were the staples of WKBD, Channel 50. WKBD went on the air on January 10, 1965, as Detroit's first UHF station, just after a federal act was passed that required television sets to include tuners that could receive ultra high frequency stations. WKBD's lineup helped make it one of the most-watched UHF stations in the United States, in fact, in 1979, it was the most-watched UHF station in America.

Many of us remember interview show host Lou Gordon, whose popular show was syndicated from WKBD to stations across the country; and Sgt. Sacto as played by Tom Ryan, but most of us remember when we turned our sets on to the Field Communications ident followed by Bill Kennedy introducing whatever movie was to be shown that night. Notable people on WKBD's longtime 10 PM newscasts included sports reporter Ray Lane and news reporter Woody Willis.

At first, WKBD was entirely independent. That ended in 1986 when they became a Fox affiliate, first branding as "50 WKBD/Fox Detroit" and then later "Fox 50".  In September 1990, the cartoon blocks that WKBD ran were mostly replaced by the new Fox network-supplied Fox Children's Network, which later became the more familiar name Fox Kids. However, Fox left for WJBK on December 11, 1994, but Fox Kids stayed on 50 as WJBK turned down that block. WKBD would not be without a network affiliation for long, as on January 16, 1995, WKBD became a UPN owned-and-operated station.

Once the new millennium got underway, WKBD was now just a shell of the 50 we remembered in the past, as the Tigers, Red Wings and Pistons games would all move to the cable-only Fox Sports Detroit. In 2006, WKBD became a CW owned-and-operated station after UPN ceased operations.