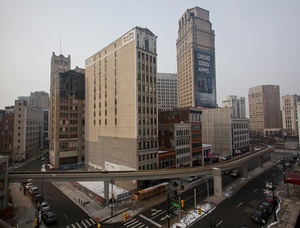 The Wurlitzer Building, designed by Detroit architect Robert Finn and built by the Otto Misch Co., is located in downtown Detroit at 1509 Broadway.  Randolph Wurlitzer opened his organ manufacturing business in New York City in 1856, but he soon took his company to Cincinnati, Ohio.  In 1912, he opened offices in Detroit at 26 Adams.  The Detroit location was doing well enough for Wurlitzer to build a magnificent 14 story skyscraper in the Renaissance Revival style to compete with other piano and organ manufacturers in the nearby area, including Grinnell.  The Wurlitzer Company used the building for a number of purposes.  The building had stories devoted to showcasing grand pianos, radios, and turntables in a home-like setting. Other portions of the building were dedicated to instrument repair, music lessons, and selling sheet music, records, various instruments. The building even housed a 400 hundred seat auditorium.

The Wurlitzer Company manufactured organs, pianos, and jukeboxes in New York, and then they were shipped to stores, including the Wurlitzer Building in Detroit.  Though the instruments were not made in Detroit, the Wurlitzer Building would have been filled with all sorts of music throughout the business day, as people visited the piano salons, turntable rooms, and studios in the building.  There were a number of piano and organ manufacturers in Detroit in the late 1800s and early 1900s, but Wurlitzer’s main competition from the 1920s on would have been the Grinnell Brothers, whose main factory was located only a block away.  The Fox Theatre was (and still is) also only blocks away from the Wurlitzer Building, and it is one of the few places in Detroit with a mighty Wurlitzer organ.

The Wurlitzer may not be a household name anymore, but they have a big legacy in United States popular culture.  Live music from pipe organs accompanied movies in the early 1900s, and movie theaters would boast if they had a Mighty Wurlitzer.  A number of novelty restaurants across the United States, like Organ Piper Pizza in Milwaukee, still have resident organ players who take requests during busy dinner times.  Wurlitzers organs are commonly heard at festivals, especially during carousel rides.  The Grand Rapids Public Museum has a Wurlitzer and a yearly organ performance program.  Notably, the Fox Theatre’s Wurlitzer is an original Wurlitzer that has never been relocated.  This is unusual, since most Wurlitzers in operation today have been relocated or recreated from various parts.

The Wurlitzer building is much too dangerous to explore, but photographs by urban ruin explorers show evidence of a large amount of materials left behind.  Should the building ever be renovated, these materials would be able to tell archaeologists about the everyday practices that people working and visiting the building experienced.  Archaeologists could also track changes in the Wurlitzer Company and its public image by examining how the company modified the building during renovations in the 1940s.  Artifacts from the glory days of the Wurlitzer company can be seen in homes, theaters, and restaurants across the United States.  These pianos, organs, and jukeboxes show changes in the music industry from the manual creation of music to the completely automated process of the jukebox.