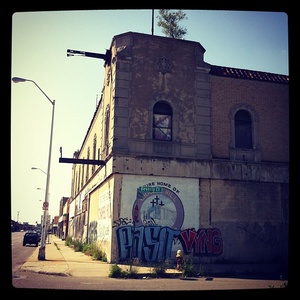 The Grande Ballroom is a rock and roll mecca, located at 8952 Grand River Avenue (at Joy) in the Ravenswood (Petoskey-Otsego) neighborhood of Detroit, Michigan

More information can be found here:

Actions, accomplishments and milestones for the Friends of the Grande Group.

Since 2008 we have no major milestones to report. The Church has not provided documentation nor any official answer to our Historic Nominatoin request.

Talks are at an impasse with the Chapel Hill Baptist Church. Calls to the Church Office and Dr. Smith have not been returned since a roof inspection was canceled Monday June 2nd. The church has had over one year to vett the Historic Nomination. Meanwhile, the church continues to receive city fines for failure to secure the property etc.

FOG forwards an offer by John D'anunzio of Paragon roofing to inspect the Grande Ballroom roof free of charge. This appointmemt was also to be an opportunity for Filmaker Tony D'anunzio to shoot interiors of the building. Chapel Missionary Baptist Church cancels this appointment at the last minute.

Wednesday April 30th FOG members Tom Gaff, Tom Lubinski and Leo Early Accompanied CHMBC Deacons Fells, Cook and Johnson on a spring inspection tour of the Grande building.The winter, having been particularly harsh, has been hard on the building. Water and thaw-freeze cycling has caused two 6-8 foot limestone cornices or "capstones" to fall to the street and onto a neighboring building. A third section is threatening to do the same. Plaster debris was shoveled off the stairway to the roof. The framing of the doorway to the roof is failing so this exterior door had to be gently pried open to allow access. The Grande actually has two roofs, an exterior "upper roof" and a lower "ballroom ceiling". Photographs were taken of the upper roof and corner Spanish tile "peaks". The roof membrane has failed in several sections and water finds easy drainage through these holes. Elbow shaped ventilator shafts have lost their caps to scrappers. It was calculated that this 17000 square foot roof drains 177 gallons during a one inch rain. Detroit averages 2.6 inches of rain per month.

The rear fire escape door was chained (to some degree of success) to limit unauthorized access. A proper job of this will need to be performed in the future. Also, this trip the basement of the building was visited and found to be surprisingly dry!

FOG members led a BBC crew along with John Sinclair through the Grande. This is John's first time inside in nearly 40 years ! It is, oddly the first time inside for our hosts, the staff of the Chapel Hill Missionary Baptist Church. The resultant film, "Motor City's Burning" airs on the BBC in 2008.

Despite the curious events in Detroit on Thurrsday the 13th, FOG presses forward to Lansing as the Grande Ballroom is on the agenda for the SHPO review board. Rebecca Binno Savage who wrote our nomination, presents the Grande Ballroom to the board. Janese Chapman from the City of Detroit Historic Designation Advisory Board also sits on this review board. The board, although enthusiastic about the Grande, is forced to defer to the City and owner approval of the nomination.

The National Historic Registry Nomination process normally begins with the property owner appearing before the City of Detroit Historic Designation Advisory Board. The HDAB forwards any approved properties to the Mayor for signature. The Grande Ballroom was presented to the HDAB on September 13, 2007 by the Friends of the Grande. No response was receved by the FOG from the current owners prior to this meeting. 20 + members of the Chapel Missionary Baptist Church, the building's new owners, appeared for comment. Reverend Smith and the church asked the board for more time to investigate the proposal. The Grande Proposal is Tabled.

I represent an organization called the Friends of the Grande Ballroom. Our group is a grass roots association engaged in the preservation of Detroit, and specifically the historic legacy of the Grande Ballroom. It is our pleasure to officially notify you of our efforts to submit the Grande Ballroom building to the State of Michigan for nomination to the National Register of Historic Places. If approved, this process will place the Grande on the National Register in recognition of its architectural and cultural significance. We hope that this status will be of benefit to you and to your congregation's expansion plans. We are confident that we will be successful in garnering the nomination and hope to speak to you in person soon. We would also like to wholeheartedly offer our group's assistance in fund raising and cleanup towards renovation of the building. In the interim, if you have any questions regarding> our efforts, please feel free to call me directly. Sincerely,

The Friends of the Grande Ballroom

History of the Grande Ballroom 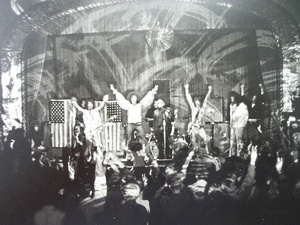 The Grande Ballroom is located at 8952 Grand River on Detroit’s west side.  It was

designed in 1928 by Detroit engineer and architect Charles N. Agree for dance hall

entrepreneurs Edward J. Strata and his partner Edward J. Davis, who managed the

Grande and the Vanity Ballrooms for many years.  The Grande Ballroom building was

Initially owned by Harry Weitzman.1  The Grande started off as a place that Detroit

until after World War II, but it would become famous in the annals of music history as a

the first floor and the ballroom on the second floor. Its ground floor had several retail

tenants, such as the W. T. Grant Department Store, Beverly’s, Maas Bros., and a

drugstore.  The "sprung" hardwood dance floor flexed to give the dancers a feeling of

floating.  The dance floor also boasted of being able to hold 1500 dancers and was

considered one of the largest in Detroit.   When the Grande Ballroom opened in

1928 the surrounding neighborhood was predominately Jewish, but by the 1960s it was 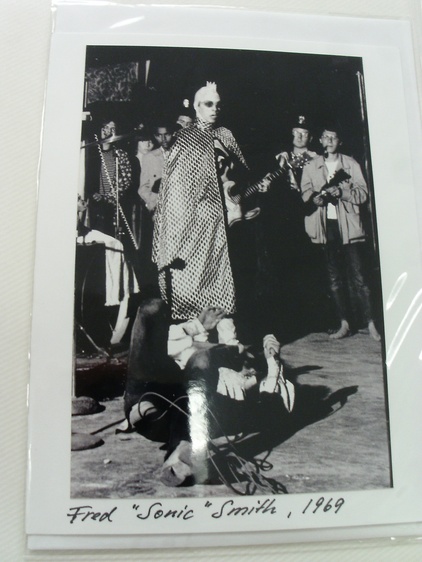 friend in San Francisco and attended “The Byrds” concert at the Fillmore Theater.  He

Detroit.  He started scouting locations in the city which included the Gayety Burlesque

Circus Park, which have both been demolished.  He settled on the Grande Ballroom at

the corner of Grand River and Joy Roads, a neighborhood that he had grown up in the

Gibb approached some of his disc jockey friends to support his vision, but they

declined due to the location of the ballroom.  He then reached out to Detroit’s

beatnik community and met people like John Sinclair, a “long hair” who had served a

columnist for the counterculture newspaper “The Fifth Estate.”4  Sinclair would go on to

manage the band the MC5, who became one of the Grande Ballroom’s house bands. 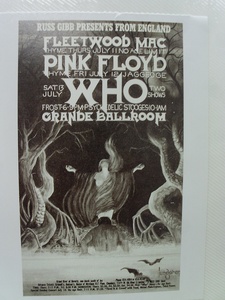 Russ Gibb did not want just another teen club, his place was going to be different.

Fillmore and Whiskey A Go-Go.5  He wanted a place where bands could write and

perform their own material and create their own identities.  There would not be any

cover bands or bar bands.6   He wanted local bands from Detroit and the surrounding

suburban areas, as well as booking in national and international bands.

psychedelic water and oil images.  A round light fixture hung at the center front of the

stage, which is visible in historic photographs of the space and always serves as an

indicator that the band pictured was performing at the Grande Ballroom.  The MC5

(Motor City 5), became one of the popular house bands at the Grande, playing there on

a regular basis along with other local bands like Ted Nugent and the Amboy Dukes, the

Russ Gibb to his friend Gary Grimshaw, who became a legendary graphic artist

producing posters and handbills to promote shows at the Grande.  Normal capacity for

packed in there to see the bands, with crowds milling around outside.  Tickets normally 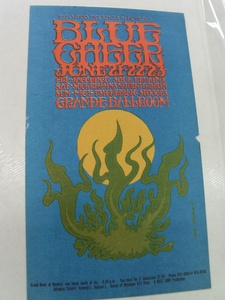 The Grande opened the evening of October 7, 1966 to a crowd of about 60 people

came to see the Chosen Few and the MC5.  This concert featured one of the largest

strobe lights ever built at the time.  The next night, a crowd three times the size of the

opening night’s audience showed-up for the concert, an early sign of the attraction the

Grande Ballroom had for youth from the suburbs, who came to Detroit to be a part of

Detroit on WKNR-FM, known as Keener 13 to its radio fans. The other underground

radio station in Detroit was WABX. Both stations had progressive formats that attracted

Grande Ballroom every weekend.  Radio listeners tuned in to find out the latest

information on upcoming concerts and music by their favorite bands.

The Grande showcased local bands like the MC5, as well as national and international

bands like John Lee Hooker, The Who, Cream, the Yardbirds, Pink Floyd, The Thyme,

Savoy Brown, The Moody Blues, The Velvet Underground, Country Joe and the Fish,

Blue Cheer, The Grateful Dead, Small Faces, The Troggs, The Mothers of Invention,

Eric Burton and the Animals, and many more.8

Eventually, the Grande Ballroom under the supervision of Russ Gibb started

deteriorating, as facilities and infrastructure fell into disrepair. Though the Grande was

venues and the Grande began losing money.  By the time the Grande Ballroom closed,

Gibb was booking bands for bigger venues like the Michigan Theater, also called the

Michigan Palace, Olympia, and others in the Midwest.9

The Grande Ballroom is very important both historically and archaeologically to

cultural music scene of the mid 1960s until it closed its doors as a music venue in 1972.   The final concert 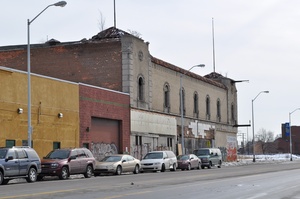 Second, there is a rich body of archaeological material culture from the Grande

Lundgren,11,12 and others, ticket stubs, photographs documenting the counterculture

groups, oral histories from bands who played at the Grande and  individuals who

attended their concerts, and of course, the remnants of the building itself.  The building

is now ruined and abandoned, and its current state of preservation is questionable.  In

2006, signs started appearing on the exterior of the building that this was the future

home of Chapel Hill Ministries. The property at 8952 Grand River was purchased by

Chapel Hill Baptist Church from Wayne County in April 2012 for $3,621, but there are

is unknown, but demolition seems inevitable.14,15

There are many interest groups, such as the Friends of the Grande, who are

dedicated to the history and preservation of the Grande Ballroom, there are also well-

maintained Grande Ballroom websites rich with information and documentation about

the Grande venue, the bands, etc., several documentaries regarding the Grande

and MC5 A True Testimonial, and a book in the works by Leo Early called Ghosts of the

Grande.  Even the Rock and Roll Hall of Fame has expressed an interest in preserving

the Grande Ballroom through a kickstarter fundraising campaign.  We will all have to