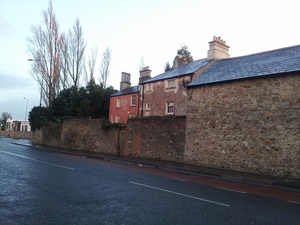 Fairholme (see illustration) dates from 1780 (three storey section) with additions in 1830-main house. Once the glebe house or residence of the rector of Monkstown parish. Large wine cellar.

Abbey Road was developed for residential use in the late 1940s and early 1950s. Development took place  separately as prior to the local government reorganisation of 1993, the road was divided, the east side being situated in the Borough of Dun Laoghaire, while the west side was under the jurisdiction of Dublin County Council. This led to different levels of services and rates (local property taxes), depending on which side of the road a resident lived. The actual road including the grass verge and footpath, was the responsibility of Dun Laoghaire Corporation, which also piped water, (supplied by Dublin Corporation from Roundwood, via Stillorgan reservoir) to houses on the county side. With the rapid increase in houses and people during the 1960s, water was in short supply, and Dun Laoghaire supplied water at a lower pressure to those residents outside the borough. Eventually the County Council was persuaded to instal a pipe to connect to their own supply, and the problem was solved.

The land on the west side of the road, belonged to the Espinasse family, who lived in Abbey View House. Most houses on this side were built with very long back gardens. Originally,a road parallel to Abbey Road with additional houses was planned, but with the recession of the 1950s, this did not materialise, so the land was incorporated into the houses fronting Abbey Road. The west side also included four residential shops on a branch road near Saint Fintan's churchyard. These shops were separated by the space where the parallel road would have been built. Subsequently, a factory was built on this space, now a site planned for residential development.

On the east side, houses 41-58 were built with Abbey Park. This land had been part of the demesne of Boley, the seat of Sir Valentine Grace. This house, the site of which was replaced by Rory O'Connor Park in 1962, had an imposing entrance at the corner of Monkstown Avenue. One pillar of this gateway remains on the corner beside the shop.  The top branch of Stradbrook Road, was consequently known as Boley Road. The Texaco service station on this side, opened about 1964. It was run by the hardworking Carroll family. In 1965 (I think), George Carroll senior opened on Christmas Day, unheard of in those days. Between the side entrance of Boley, and the garage, was a detached house, built earlier than the other modern houses. This was replaced by student apartments during the Celtic Bubble. Other estates on this side are Casement Villas, built about 1958, opposite Baker's pub, and Abbey View, built in the late 1960's on the grounds of the house of the same name.

The  defining influence on Abbey Road, was Sutton's Tel el Kebir dairy. The actual dairy plant was on the corner of Monkstown Avenue, it presented an image of Heath Robinson proportions, but it worked. Lorries collected fresh milk mostly from farms in Wicklow and north Wexford. A hooter announced when it was time for work and breaktimes, which also regulated mealtimes for the residents, as children knew it was time for dinner when the hooter sounded at 1300, or 1 pm, as we knew it in those days. On the west side, replaced by the link road and roundabout about 1971, was the stabling and grazing field for the horses which drew the milk floats. Fresh milk was collected by tanker lorries, mostly from farmers in Wicklow and North Wexford, and pasteurised then bottled. About 1967, Suttons amalgamated with Merville of Finglas, and Dublin Dairies of Kimmage and Killester. The resulting company was Premier Dairies, and battery powered milk floats took over from the horses. Subsequently, a deal was done with Hughes Brothers dairy at Nutgrove, from where packaged milk was transported to the TEK depot for local delivery. Eventually the depot was closed, and diesel vehicles delivered directly from Nutgrove. The dairy had a football team, which is still in place, now accessed from the Link Road. The dairy also ran the corner shop.

The Abbey is Kill Abbey, located adjacent to the ruins of Grange Church, about 300m west of Abbey Road, on a small road which is also listed on maps as Abbey Road.