Adelaide Cottages a group of cottages in a cul-de-sac on the west side of Adelaide Road, Glasthule.

The 1901 census shows 8 houses there, some with multiple households.  The number of people there was 43.

The 1901 census shows 6 houses there, some with multiple households.  The number of people there was 31.

Map (right) shows the position of the former Adelaide Cottages 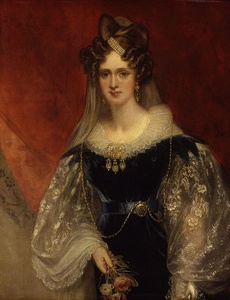 Adelaide(left) 1792-1849 was the spouse of King William IV (1765-1837), and the sister-in-law of George IV.  Adelaide and William had two legitimate daughters (William had many illegitimate children).  One daughter died at birth, while the other died in infancy.  So the monarchy went to William's niece, Victoria, on his death.  George IV visited Dun Laoghaire in 1821, and many streets are named after members of his family.