There were two places called Albert Place in the Dun Laoghaire area.

Albert Place off York Road is shown on the 1866 and 1908 maps off York Road, close to the present location of York Terrace

Albert Place, Glasthule was demolished at some time and no longer exists. It was located on the west side of Albert Road Lower, approximately at the position of No 12 Albert Road. 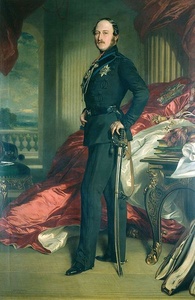 He was born in what is now Germany to a family connected to many of Europe's ruling monarchs. At the age of 20 he married his first cousin, Queen Victoria, and they had nine children. In the style of today's royal family he adopted many public causes, such as educational reform and abolition of slavery, and took on the responsibilities of running the Queen's household, estates and office. He was heavily involved with the organisation of the Great Exhibition of 1851.

He died at the early age of 42, plunging the Queen into a deep mourning that lasted for the rest of her life.