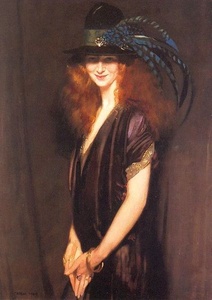 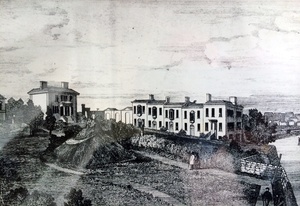 View of the street from Shaws Street Directory 1850. Note Marine Parade did not exist at this timeBallygihen Avenue was the location of a convent and school of the Sisters of Mercy, who moved to St Michael's Hospital in 1876. The convent was located in a large villa, Ballygihen House ,also called Sandycove Lodge, was built around 1840-building out of frame to right of Gowran Hall in 1850 picture. Its bay windows overlooked Scotsman's Bay.

Arch of pedestrian entrance to its landscaped grounds can still be seen at top of street beside shop.

A feature of the grounds was an artificial mound with a statue of a sailor surrounded by seats-see 1850 illustration. Later replaced by a cross (1867)

There appears to be the remains of an old harbour wall at the end of the avenue. Probably demolished when Marine Parade was completed in 1922.

First Ordnance Survey map of this area was published in 1843 and shows already a clear outline street plan. The later 1867 map shows over a hundred new houses, detached and terraced, in the Sandycove area.

Ballygihen Avenue was the home of the Glenavy family. They lived in the  house, named "Rockall", now named Fastnet, at the bottom on the right, facing north. Lord Glenavy was James Campbell, noted Irish lawyer. He died in 1931.. His wife, Lady Beatrice Glenavy was a noted writer, as indeed was her son, Patrick Campbell. A humourist, he traded on his stutter.

The picture (right) shows a view of the street from Shaws Street Directory 1850. Note Marine Parade did not exist at this time

Number 2 (Ballinlonty House, called after a townland in Co Tipperary) acquired a porch at a later date. Owned by Redmond family since 1984. 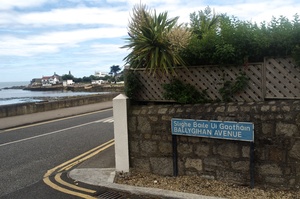 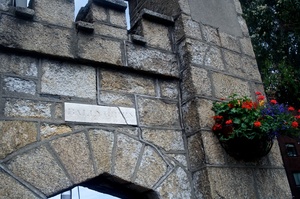 See original name in archway beside shop at top of street, archway was originally pedestrian entrance to gardens of Ballygihen House