Barrett Street is a short cul-de-sac on the west side of York Road, less than 100m from the junction with Cumberland Street. 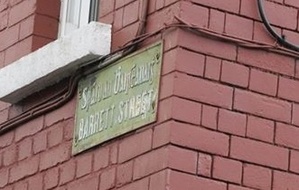 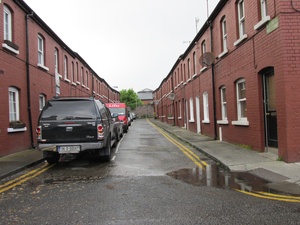 It was built by the town commissioners in the first decade of the 20th century, as part of an initiative to provide improved housing for the workers of Kingstown and their families.

The 1911 census shows 36 numbered houses, with many houses having two households, one upstairs and one downstairs.  158 people are recorded there in the 1911 census.

The name of Barrett Street is associated with William G Barrett (1841-1908), who lived at Newtownsmith, and operated a mineral water business, as well as the firm of W.G.Barrett & Co., Wine merchants.  He is listed as a juror on several controversial cases.  He was one of the councillors who signed the address of welcome to Queen Victoria on the occasion of her visit to Kingstown.

Mahony John Born Dun Laoghaire Son of Julia Christy Mahoney (as written) 26, Barrett's Street Kingstown.  Julia Mahoney a widow, was living at this address on census night with six of her children. John is present and is returned as being 23 years of age.

Graham Christopher Patrick, Son of Patrick and Annie Graham 8,Barrett Street Dun Laoghaire. H M P M S Erin. Killed by mine explosion 7th February 1919. Age 24. Christopher is not returned in the census by his parents who were at this address with three of their six children.