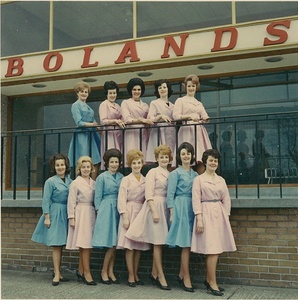 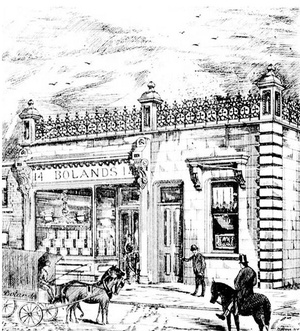 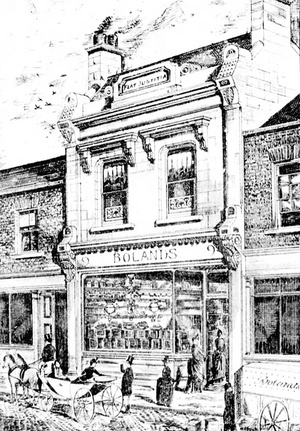 Shop at 9 Upper George's St (Archiseek.com)Bolands  were established in the Dublin area in the 1800s, and had flour mills, bakeries for bread and confectionery, and biscuit factories.  Their mills in Dublin were the scene of fighting during the 1916 revolution. 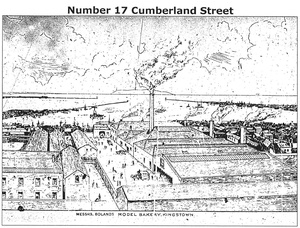 In the 1893 Thoms Directory, Bolands is shown as having the Model Bakery at No 14 Cumberland St., and as having a bakery at number 17.  In fact, Number 14 was the location of the bakery shop, on the seaward side of the street.  The actual bakery, called Bolands Model Bakery was on the opposite side of the street at number 17.  In the 1850s, the site was that of the police station (there were two police stations in the town at that time), but is shown as vacant in 1870.  The actual baking there ceased at some stage probably about the 1960s, but the premises continued to be used as a distribution centre for some time.  In the 1970s, the Technical school was established there.  Much of the site is now occupied by Dun Laoghaire Further Education Institute (formerly Dun Laoghaire College of Further Education) (see map, right). 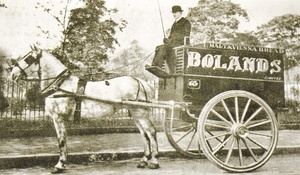 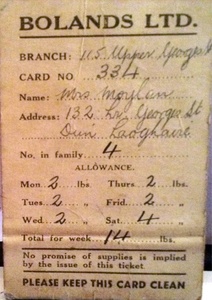 Wartime rationing.  The government had its ration books, but Bolands also had a system of controlling supplies.  Bread was a very important staple diet then. 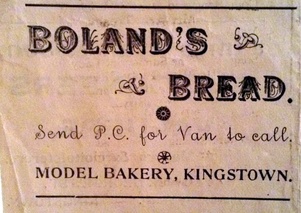 Early Ad for the Model Bakery.  From the days when phones were rare or non-existent.  You could send a postcard asking the van (probably horse-drawn) to call to your houseThe Retail Shops

In the 1893 directory, retail shops are shown at 14 Cumberland Street and at 9 Upper Georges St.  Both had exceptionally ornate design.

The Cumberland St shop was located in the position where the offices of Goal charity is now.

The shop at 9 Upper Georges St was just 1 door away from the junction of Mulgrave Street, at the point where the Bernardos Charity shop now stands.  However, in 1901, the street was widened at that point.  The street widening involved the demolition of the frontages of all shops in that block, and the rebuilding of new frontages about 14ft back.  The shop did not re-open, and the site was idle for some time before the Kingstown Picture House was constructed there about 1912

The shop at 115 Upr Georges St opened some time in the late 1930s, but was one of the buildings demolished to make room for the building of Dun Laoghaire Shopping Centre which was built about 1975.

During the 1960s, when their biscuits were widely sold they had a radio advertisement which ran:-
Bolands Light and Bolands Munchy
Bolands Crisp and Bolands Crunchy
Taste them and you must agree
There's plenty of varieteeee
Oh Bolands!  The biscuits that you'll love

The Biscuit Factory at Kill Lane

One person's experience of Bolands Biscuits

This is just a personal account of my working life in Boland's Biscuits. I started in 1961 as a 17 year old.I think that in was 1957/8 that the factory opened  When I was interviewed for the job I was told that my wages would be £6.00 and it was with some disappointment that when I received my first wage packet there was only £3.12.0. It seems that some sharp-eyed cost clerk noticed that there was no wage agreement for males under 18 so I went onto the female rate. And the times been what they were on becoming 18 I got the £6.00 but the females got no such increase,"The Good Old Days" yeah and I wouldn't mind but I always thought that packing the biscuits,which was done by the females was far more onerous than a lot of the work the males did. 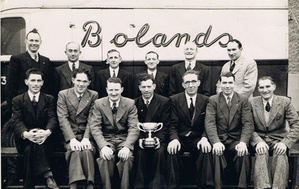 This shows a Boland's Bakery team who won a tug-o-war event at a sports in the grounds of Beaufort in, I'd say, the early 50s. The only names I can remember:
B/Row: (?), (?), Jack Matthews, Paddy Matthews, Tom Holden, (?).
F/Row: (?), Maurice Walsh, Mick Duane, (?), (?), Eddie Boyle, (?) Connel
I started in the stores. Mr, Conway was the Store Manager he was from Rialto,he was very meticulous but fair and I enjoyed working there. One of my jobs was to receive and store all the paper goods and other incidentals that were required in the running of a factory of 2 to 3 hundred people. Another was to fulfil the requisitions, as they were called, for the materials to wrap the biscuits. Each morning a list of items was submitted and I would deliver them to the different areas where they were required. One of these areas was known as the hand wrapping band and I can't say that I ever enjoyed delivering to it. These bands were staffed by anything up to 40 girls and you felt that all their eyes were on you and they were just waiting to slag you and no one was immune to their clever and savage wit. I remember one time I'd been going out with a girl for some months and I had decided that it was a little too young to be going steady so I told her. The next morning as I was walking down by the hand wrapping table they all broke into singing "To Young to go Steady", by that table I thought I'd never get. You just could not put a foot wrong and that went for everyone. Looking back on it now it was great fun and them girls were just so smart in the use of song to heighten peoples embarrassment. You always knew that walking the gauntlet of the wrapping table that some song would be sung that would hit a sensitive nerve.

When I worked there first there were 3 main ovens which baked cream crackers and plain biscuits. In 1962/3 an extension was built and cream and chocolate biscuits were added to the range. The factory was expanding, it had a big contract with Marks and Spensers an expanding export business in America and more people were being employed,  things were looking good. There was plenty of overtime and people could plan a future.  An evening shift 5 to 10 was introduced and a lot of married women were taken on. This was a great boost to the area as prior to that women had to surrender their jobs when they got married. So the additional income and independence that women got from this made big changes in their lives. When we first heard the rumours that Jacob's planned a takeover we were surprised and then we were told that the reason they were interested was that there was room for expansion in Deansgrange where no such space existed in Bishop's Street. All lies,it was a simple matter of closing down a competitor. We tried to get political support but to no avail,even sit-ins were considered but did not have sufficient support. I took redundancy in 1971  as did a number of people others went to Bishop St. and then finally headed to the new factory in Tallaght. The factory closure was a big economic loss to lots of people in Dun Laoghaire, it had influenced so much of our lives and so many of us met our partners there. I've only good memories of Boland's, met lots of life long friends and I would probably have spent my working life there if it had not closed.

(Some pictures and captions from www.dunlaoghairecounty.ie)