Cantwell Lane is a small lane which joins Mulgrave Street and Patrick Street.  It was named on 24th March 2014 after Josephine Cantwell.  The proposal was made by Victor Boyhan.  The citation provided at the relevant meeting of Dún Laoghaire Environment, Culture and Housing & Community Area Committee read as follows:-

Josephine Cantwell was born in 1867 to Anna Teresa (née Calderwood) and James Cantwell at 16 D’Olier Street, Dublin which was the family-owned hotel called ‘The Star and Garter Hotel’ (now occupied by The Irish Times). The Cantwell family had a residence in Newtownsmith, Glasthule in the 1870’s. In later years they lived at number 3 Hastings Terrace, Sandycove where Josephine resided until 1924. She never married;the great love of her life, Daniel Clery - who was many years her junior - was killed during the first World War. The son of Richard Clery of ‘Fortwilliam’,Glasthule, Daniel Clery was a Lieutenant serving with the 6th Battalion of the Royal Dublin Fusiliers when he was killed in action in Gallipoli in August 2015. On the 15th January 1920, the Local Government Elections were held. There were four Electoral Wards, Kingstown East, Kingstown West, Monkstown and Glasthule. The decision of the Electorate saw 8 Unionists, five Sinn Fein, 4 Nationalists and 4 Labour Candidates returned as local representatives on the Kingstown Urban District Council. Josephine Cantwell was returned for the Glasthule Ward making her the first lady to be elected as a member of the Council.
Josephine Cantwell died in January 1950 at her residence in Pembroke Road, Dublin, aged 83 years. She is buried in St. Patrick’s section of Deansgrange Cemetery. It is interesting to note that six months after being elected, the Kingstown Urban District Council voted to change the name Kingstown in favour of Dun Laoghaire ipso facto making Jospehine Cantwell ‘Dun Laoghaire’s First Lady’. 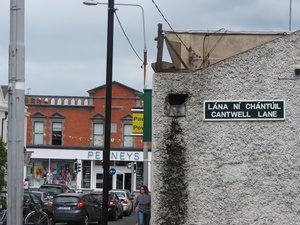 One of two signposts showing "Cantwell Lane" which have been placed on Lynch LaneThere is significant confusion regarding Cantwell Lane.